The auto theft charges against Ruth were dismissed (undoubtably due to the fact that Lionel Hutz was representing her ex-husband), but she was later imprisoned for a short time for another offense, which is unspecified. While she was in prison, Ruth built up her muscles and became a bodybuilder, earned the title "Miss Mexican Mafia," and took steroids to expand her muscles.[2]

She might also be a alcoholic, since she is seen at an alcoholics anonymous meeting in Simpsons: The Movie. 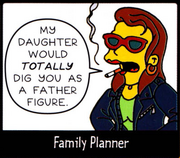 Retrieved from "https://simpsons.fandom.com/wiki/Ruth_Powers?oldid=636593"
Community content is available under CC-BY-SA unless otherwise noted.