She might also be an alcoholic, since she is seen at an alcoholics anonymous meeting in Simpsons: The Movie, as well as watching a video on the results of drunk driving with a horrified expression on her face. 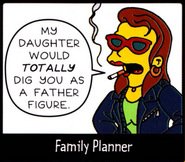 Retrieved from "https://simpsons.fandom.com/wiki/Ruth_Powers?oldid=689180"
Community content is available under CC-BY-SA unless otherwise noted.