Sam is one of the two barflies usually seen at Moe's Tavern, along with Larry. Their first appearance is in "Simpsons Roasting on an Open Fire". Virtually nothing is known about them. Sam always wears a light green cap and glasses, and appears to have severe scoliosis. Sam is a wife dodger, but Homer says good things about him. Sam is 42, just like Larry.

In "Worst Episode Ever", Moe instructs him to "get out, and take your Sacagawea dollars with you" before giving him one out of a promised three seconds after which he appears to shoot him to the apathy of the fellow barflies; however, Sam has appeared alive and well since.

Sam very rarely talks, but when he does, he makes it count. In "When Flanders Failed", he is passed by Bart at the mall apparently engaging in either phone sex or consensual relations, stating over the phone in a suave voice, "Baby." He speaks again in "Lisa the Greek" where he believes that Homer literally bet his daughter on a football game and then remarks "Wow! What a gambler!" In "Homer vs. Lisa and the 8th Commandment", he is briefly seen without his cap. In "Bart's Dog Gets an F", he is seen with his dog.

Sam had another brief speaking role in "El Viaje Misterioso de Nuestro Jomer (The Mysterious Voyage of Homer)". When Homer goes to Moe's Tavern in hopes of finding his real soul mate (which he called Barney, who says he's more of a chum), rather than saying they're soul mates, each of the patrons there give him one word answers of what they are to him. In Sam's case, he replies "sympathizer".

Another instance where Sam talked again was at the end of "Waiting for Duffman". Homer had just sat down thinking about his experience of briefly being Duffman, Sam was lying drunk on the counter next to him until he woke up hungover. Sam proceeded saying to Homer in a drunken manner, "Hey hey, yo-yo-you used to be Duffman, can I get a picture with you?" before falling back to sleep. Because of the little recognition that Sam gave to Homer, he finally felt appreciated for being a "has been".

At the end of the episode "Gal of Constant Sorrow", Sam is seen going through rehab with others like Krusty, Disco Stu, and the Sea Captain. It may be implied that Sam was there to get cured from being an alcoholic as Barney was also present. Although his rehabilitation didn't take effect as he and everyone in the rehab center had escaped to Moe's Tavern to start drinking again. Sam was also seen having a drink with Dr. Hibbert's wife Bernice, as they seem to know each other.

During the flashback of Homer and Marge in "3 Scenes Plus a Tag from a Marriage", a much younger and lively Sam is seen enjoying the performance that Moe is putting on at the roller disco. This younger Sam sports a purple cap and has much longer hair than he does now, he also wears a grey-green jacket and looks very hip with proper 1970's attire. While Homer and Marge are twirling, Sam is seen in the background briefly with a woman, this could presumably be his girlfriend and soon to be wife if this is the case.

In the episode "Flanders' Ladder", Sam had died and turned into a ghost in Bart's coma when Moe had served him, Barney and Larry lacquer instead of liquor.

He is also a customer at La Maison Derrière.

Sam seen as young adult at Three Gays of the Condo -episode.

Sam with a bleeding hand. 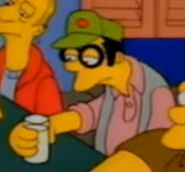 Sam seen for the first time.

Sam with other drunks.

Moe threatening Sam to leave with his Sacagawea Dollars.

Sam without his cap.

Sam without his cap again.

Sam with his bloodhound.

Younger Sam in "3 Scenes Plus a Tag from a Marriage".
Add a photo to this gallery

Retrieved from "https://simpsons.fandom.com/wiki/Sam_(barfly)?oldid=862908"
Community content is available under CC-BY-SA unless otherwise noted.