She, along with the rest of the octuplets, are a result of fertility drugs taken by Manjula, after she and Apu decided that they wanted a baby. However, Apu and Manjula swiftly find they are not up to the task of raising eight kids all at once. After talking with Larry Kidkill, the octuplets are put in a nursery at the Springfield City Zoo, where they are put on display in a show named "Octopia", several times a day. After Apu and Manjula are displeased by this, he and Homer decide to break the children out of the zoo.

While the octuplets are usually shown as a group, each of them can occasionally be seen involved in doing things apart from the rest of the octuplets. Some of Sashi's activities consist of: 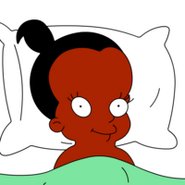 Sashi wiggles while Apu holds her by the head. 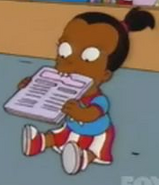