Scratchy is a cartoon cat from the show Itchy & Scratchy, an obvious parody of Tom and Jerry. His enemy is Itchy, a blue mouse. In almost every episode, Scratchy is killed or at least brutally injured by Itchy.

He is a parody of the character Tom from Tom and Jerry. In an exaggeration of Tom's role as victim, Scratchy is a hapless victim who doesn't even want to harm Itchy yet suffers horrifically painful deaths at Itchy's hands, in contrast to the mutual slapstick rivalry with Tom and Jerry do.

The Itchy & Scratchy Land is an Itchy and Scratchy theme park. It has parades with robots resembling Itchy and Scratchy which are supposed to be inoffensive and only attack themselves. However, due to Chaos Theory, the robots malfunction and proceeded to turn on their masters. While on vacation, the Simpsons were attacked by a group of robots, until they used the cameras flashes to short circuit them (the reason flash snaps are not allowed).

For a full list of both Scratchy and Itchy appearances, please see The Itchy & Scratchy Show 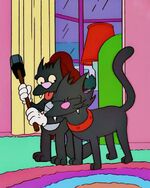 Scratchy felt he was in love with Snowball II. 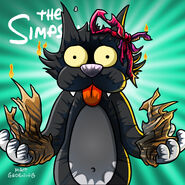 Add a photo to this gallery
Retrieved from "https://simpsons.fandom.com/wiki/Scratchy?oldid=847018"
Community content is available under CC-BY-SA unless otherwise noted.