Shelby is a boy who is a Shelbyville version of Bart Simpson and apparent bully who lives in Shelbyville. Both he and his father live at the Shelbyville Car Impound Lot, where his father works.

His friends are Milhouse, the first, second, third and fourth unnamed boy.

When Bart tries to retrieve the lemon tree by going incognito, the Shelbyville boys put him to the test by making him spray paint "Springfield Sucks" on top of the Shelbyville Bluffs. After first, Bart spray paints what he tells him, but he actually paints "Springfield Rules Suckers", and reveals himself to the boys. Before Shelby and his gang can beat him up, Bart's distracts them by telling them there's an attractive cousin. After Bart swipes one of the Shelbyville children's skateboard to make a getaway, Shelby proceeds on his skateboard to catch him, leading to an all-out chase around Shelbyville.

While Bart accidentally hides out in the Tiger Feeding Area at the Shelbyville Zoo, Shelby and his gang almost catch up to him, before Bart picks the right door to escape through. Later on, Shelby is later seen making lemonade, while his friends ride motorbikes around the lemon tree. Shelby is last seen helping his father close the impound lot gate to prevent the Springfield boys and their fathers from getting away with the lemon tree tied on top of Ned Flanders' RV, only for them to shake their fists in anger as they get away.

He looks similar to Bart, with the exception of his hair, his pants, and the color of his hat, he bears some resemblance to his Springfieldian counterpart. He also has a best friend named Milhouse and a similarly dim-witted, balding father like Homer. He is arguably smarter than Bart as evidenced by his quote, "You just got citric acid in my eye!" However, he falls short in the name-calling department, having been handily out-insulted by Bart in the first encounter near the lemon tree.

"Takes one to know one" 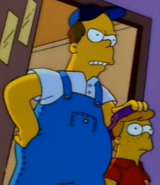 Shelby and his father
Add a photo to this gallery

Retrieved from "https://simpsons.fandom.com/wiki/Shelby?oldid=822966"
Community content is available under CC-BY-SA unless otherwise noted.