A copy of The Springfield Shopper spins into frame with the headline COUCH GAG THRILLS NATION and a picture of The Simpsons on the couch.

“Christ is born, who's on my horn?”
―Timothy Lovejoy, Jr. picking up the phone

Simpsons Christmas Stories is the ninth episode of Season 17 and the 365th episode overall. This is one of several Simpsons episodes which are considered anthology episodes featuring mini-stories.

It's D'oh-Ho-Homer with these three Christmas stories:

The First D'oh-El - When Reverend Lovejoy can't get to church to deliver the Christmas sermon because of a train wreck (a model train wreck, that is), he asks Ned to deliver it, but when Ned gets a paper cut, it becomes The Gospel according to Homer, with him as Joseph, Marge as Mary and Bart as Baby Jesus.

The Nutcracker...Sweeeeet - To the music of Tchaikovsky's Nutcracker ballet, everyone prepares for Christmas in their usual way, including Moe trying to kill himself and Homer forgetting to buy Marge a present.

When Reverend Lovejoy can't attend the Christmas sermon due to his train set catching on fire, Flanders immediately takes over. 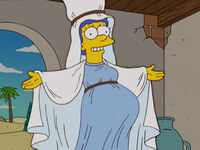 However, he gets a paper cut and faints. Homer plans to lead the sermon and tells the story of the first Christmas, with Marge as Mary, Homer as Joseph, Angel Lisa as Gabriel, Mr. Burns as King Herod, and Bart as Jesus.

Mary tells Joseph that she is pregnant, even though Mary is a virgin. The angel Gabriel appears to them and explains that Mary is going to give birth to the Son of God. The three wise men (Dr. Hibbert as Melchior, Principal Skinner as Caspar, and Professor Frink as Balthazar) tell King Herod that they are going to give gold, frankincense, and myrrh to the King of the Jews. When Herod thinks that the gifts are for him, the men explain to him that they are for the baby Jesus. Herod becomes furious and claims that he will kill the baby.

At the Bethlehem Inn, the innkeeper (Moe) tells Mary and Joseph that he has plenty of rooms available with brand new carpeting. However, when Mary's water breaks, he forces them to stay in the barn. Mary successfully gives birth to the baby, and the three wise men, along with the two shepherds (Lenny and Carl) come to see Jesus. Joseph is upset because he isn't Jesus' father, and when he drinks some wine, the baby turns it into water.

Later, when Jesus keeps crying, Mary gives him a wooden pacifier to suck on, so Jesus sucks on it, spits it out and stops crying. Mary gives him to Joseph, who entertains Jesus by hurting himself and Skinner, a la "The Three Stooges". When Jesus finally falls asleep, Herod and his troops find the manger that they're staying in. They escape and trick the soldiers by putting Jesus' halo on a duck. On top of the hill, Joseph cuts down a pine tree, and as it rolls down, the soldier gets caught in it. The soldiers, along with Herod, are arranged like ornaments on the tree, and the duck, still wearing the halo, stands on top of the tree. Mary calls it a Christmas tree, and Homer concludes his service. 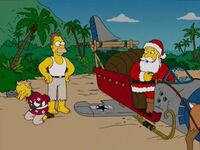 Back in World War II, Grampa and his brother Cyrus (never mentioned until now) were serving as Navy Pilots on an aircraft carrier in the Pacific; fighting off a Japanese kamikaze attack when Cyrus got shot down due to the fact that Lieutenant Montgomery Burns, Abe's tail-gunner, refused to radio Cyrus because he was busy talking to a girl on the plane's radio. Shortly after, Abe and Burns also get shot down and are stranded on an island. Burns tries to assert dominance stating that on the island military rank means nothing, and that the strong of will control the weak. Abe, however, the commanding officer, is not threatened by this and quickly overpowers Burns, asserting his own dominance, by dunking Burns' head repeatedly in the ocean. They eventually settle their differences.

After a few months, on Christmas Eve, they see a plane in the sky, and Lt. Burns shoots it down. However, when they go over to investigate, they see that it is actually Santa Claus. They build him a new sleigh using the parts from the plane and they gather up all the presents. When Santa was about to leave he was missing Prancer and Rudolph, the latter shown to be in a snake. Lt. Burns knocks him unconscious with a coconut and flies away in the sleigh and claims that he is going to keep all the presents, because at heart, he's just a very wicked child. Grampa catches up to him on Prancer and jumps on board the sleigh. After he beats Mr. Burns with a tricycle, stating that someone should have done that years ago, Abe gives the sleigh back to Santa. As Santa leaves, he tells the young Grampa that he will be back in a few days. As Santa flies away, Abe states that it was the craziest thing he had ever seen. Immediately afterwards, a nuclear test explodes at nearby Bikini Atoll, causing Abe to restate his previous claim about the rising mushroom cloud. Santa Claus, however, never comes back and Abe then claims he had to get off the island using a jet ski he made out of coconuts.

Bart and Lisa believe that it's just another one of Grampa's far-fetched tales, but when they hear a thump in the den, they find that Santa is there. He tells them that Cyrus didn't die, but instead crashed into Tahiti. Santa takes Grampa there, and they meet up with Cyrus and his fifteen wives. Santa explains to Grampa that he didn't come back for him on the island due to his procrastination, and he eventually felt embarrassed about it. 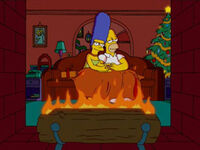 After the children of Springfield Elementary perform The Nutcracker, everyone begins to go along their day singing to the tune of "March". This is done after mentioning that the songs in The Nutcracker are in the public domain and thus can be (and are) played constantly for free. Homer tells Grampa that they aren't going to be at home and hides when he comes, forcing Grampa to spend his Christmas in the dumpster with raccoons, who give Grampa some rancid lard.

Krusty then shows a clip of The Krusty Show from 1964 where the audience used snowballs to pelt Krusty and with John Glenn and Martin Luther King, Jr. as guests. After the opening number, Moe continues his annual holiday tradition and attempts suicide thrice, and naturally fails, done to the tune of "Dance of the Flutes". Moe first tries to hang himself with string popcorn which breaks. Next, he rides a sleigh through traffic with a note saying No one gets my organs pinned to his chest, but isn't run over. Moe then tries to shoot himself with a gun but this turns out to be a comedy "bang gun" saying "Merry Christmas". Finally, Moe asks Barney to kill him, but Barney refuses on the grounds that he had brought him a wool hat.

That evening, Marge tells Homer that he will like the present that she got him. Not wanting to upset her, Homer tells her that his present for her is outside and drives away to buy her a present, singing to the tune of "Russian Dance". Every store is closed, and all Apu has at the Kwik-E-Mart is some jerky made out of trout. Homer searches in garbage cans, gutters, trees, and he even chases down Milhouse, but he can't find anything.

When he gets home, Marge gives Homer his present, done to "Pas De Deux". He opens it and sees that it is another present with a tag that reads, "To Marge, From Homer." Marge tells him that she knew that he would forget to give her a present, so she gave him one to give to her. He gives it to her and she unwraps it, and Homer sees that it is a picture of him dressed up as Santa with Marge on his lap. They hug and kiss, and Moe, for the fourth time, attempts suicide by again riding on a sleigh in the road, and fails again after a semi barely runs him over.