What are the characters' ages?

The Simpsons has been on the air over 25 years, but the characters are the same ages as when they started: Bart is still 10 and in school, Maggie is still a baby, etc. In a recent episode, "Bart Stops to Smell the Roosevelts", pictures of Presidents Bush through Obama are seen. So how can they not age when we know time is passing and the show is taking into account real-world events?

The answer is that it is a deliberate contradiction. Matt Groening said "it was always [his] intention to not have the characters on the show age, thanks to the wonders of animation".[1]

Based on this, we should not try to adjust the characters' ages. For example, if a character was said to be 30 in an episode that was broadcast in 2000, we should not change their age to 44 because 14 years have passed since then (as of 2014). That character is still 30 years old. 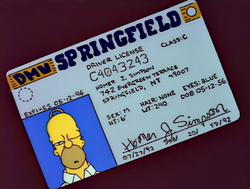 As another example, Homer's driver's license was shown in the episode "Duffless". Based on that, Homer was 36 years old on July 27, 1992 when the license was issued. We should not change Homer's age to 58 simply because 22 years have passed for us between 1992 and 2014. Any changes to his age have to have a source. In this case, three other episodes have given a different age for him and need to be noted.

Likewise, inventing an age or other biographical information such as a year they were born or died is not allowed. If the people that make this show did not feel it is relevant enough to include it, then we should not try to create one. Doing so is fan fiction and is presumption to think that we know more than they do.

Known ages of the characters

When the age of a character is specifically given in an episode or book, it should be noted on their page and include the source. Other media such as comics, magazines and video games will have to be checked to see if they are an official source, since media like that is often made without the direct involvement of the show's creator(s) and crew, which can lead to contradictions.

With over 1000 characters having appeared in the show, it is not practical to list an age for each of them. A short list of the main characters' ages is included here. For all others, refer to their character page.

If more than one age is listed in an official source (episodes, the episode guides, etc.), then each of those ages should be listed with the episode for reference. Mr. Burns and Homer Simpson are two examples where different ages have been revealed at various times.

Where do the characters live?

Matt Groening revealed in April 2012 that Springfield was "based on" Springfield, Oregon. However, this is not the same as "Springfield is in Oregon".

The Springfield's State page discusses the possible locations where Springfield could and could not be, but perhaps the simplest explanation of which state it is in is, to borrow a quote, "wherever the story needs it to be". The episode "Beware My Cheating Bart" reinforced the fact that Springfield's location will not be pinned down. The title sequence displayed "Now Entering Oregon" right below the series name, but the chalkboard gag read "The true location of Springfield is in any state but yours".

Matt's interview in Smithsonian Magazine[5] provides further details: he thought the Springfield in Father Knows Best was the Springfield near Portland, Oregon and later learned that Springfield is a common city name. When deciding on a name for the city in The Simpsons, he thought, "This will be cool; everyone will think it's their Springfield." Many people do, and when they ask him which state it's in, he confirms their suggestion.

So, like the character ages, Springfield's location will remain a deliberate contradiction.

Simpsons Wiki is dedicated to information about The Simpsons found in the episodes, movie, magazines, comic books and other official media. Fan fiction that is added here may be deleted with or without notification beforehand.

Users who want to write their own Simpsons episodes or characters should do so on one of the following wikis:

The first wiki, "Simpsons Fanon", was an official companion to this wiki and is recommended as the home for Simpsons fan fiction.

Occasionally, someone will reference a story about "Dead Bart", which is supposedly an episode that was "lost" and is "forbidden" to show because of its subject matter. This particular story has been kicking around the Internet for many years. The story and the episode are fake, for the following reasons:

It is natural for some people to want to add this kind of information. As such, seeing it occasionally appear on this wiki should not be out of line. Simply undo the edit or manually remove it. However, for the people who have convinced themselves that it is true and repeatedly try to add it, warnings will be given and blocks set if they persist.

Retrieved from "https://simpsons.fandom.com/wiki/Simpsons_Wiki:Frequently_Asked_Questions?oldid=600557"
Community content is available under CC-BY-SA unless otherwise noted.