Start a Wiki
watch 04:21
The Loop (TV)
Do you like this video?
The title of this article is conjectural. Though the topic is found within The Simpsons universe, a proper name is not available.

Singing waiters at The Singing Sirloin

"Life on the Fast Lane"

The Sirloin Staff are waiters who work at The Singing Sirloin. They sing to their customers songs depending on the occasion. One of them is called Mary Kay and she is at the front door of the restaurant aware for customers who want to escape, like when the Simpsons were getting away to not pay and the waiters sang "They're getting away, stop them Mary Kay!".[1]

A different group of waiters singing a pregnancy announcement song.

Another different group of waiters singing a funeral song. 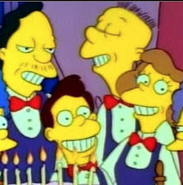 Another different group of waiters singing "Happy Birthday" to Marge.

The waiters as seen in Homer vs. Dignity.
Add a photo to this gallery

Retrieved from "https://simpsons.fandom.com/wiki/Sirloin_Staff?oldid=742914"
Community content is available under CC-BY-SA unless otherwise noted.