Smartline is a late-night panel discussion show aired on Channel 6 and hosted by Kent Brockman. This is a parody of the TV show Nightline, which premiered on March 24, 1980 on ABC, and was originally hosted by Ted Koppel from 1980 to 2005. It is one of the more highbrow programs on Channel 6, particularly when compared to Eye on Springfield, the opening sequence of which features semi-naked women winking at the viewer. Nevertheless, it usually displays obvious bias toward a particular perspective, and is often presented in a very condescending manner. The show invites numerous guests from the local area, each of whom have strong opinions about a certain issue, and has them to participate in debate. Brockman often presents the show in a manner biased to one side of the debate.

At one point, an incident occurred where Kent Brockman had to interview Homer for winning the 1,000,000th Ice Cream Cone, a decision he was not too happy with because he was intending to get into a heated debate over Iraq, and only did it because the show was sponsored by the same Ice Cream Parlor that he won the cone from. During the interview, he, while already irritated, ended up lashing out after Homer, while attempting emphasis, ended up accidentally knocking Brockman's coffee cup onto his lap, and caused Kent Brockman to shout out one of America's worst swears. Brockman then attempted to apologize on the air, and fully expected to face repercussions for his actions, although he was surprised when he learned from Comic Book Guy that no one actually saw his interview due to it not airing over the internet. Although it was not immediately discovered by the populace aside from the Simpson family, It was eventually discovered by Ned Flanders, who sent it to a Christian group he belonged to, which eventually found its way into the FCC, resulting in Kent Brockman's initial demotion to weatherman (and then firing under the official reason of him using cocaine in his coffee instead of Splenda) as well as the entirety of Channel 6 being slapped with a $10 million fine. 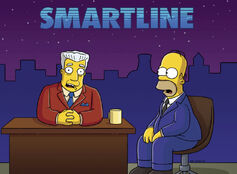 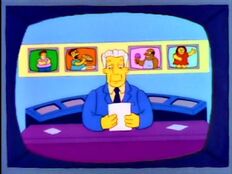 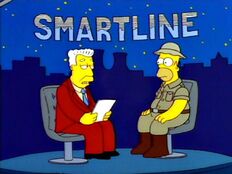 Homer as a guest in Smartline 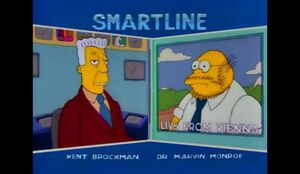 Dr. Marvin Monroe as a guest in Smartline. He was in Vienna. 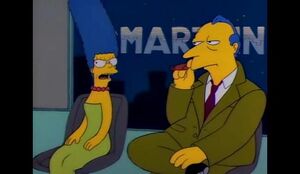 Marge with Roger Meyers in Smartline discussing about "Itchy and Scratchy". 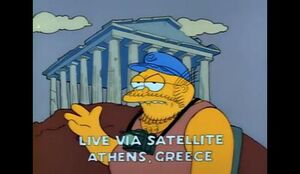