The War of the Simpsons

Chester "Snake" Turley, or Snake Jailbird, Albert Knickerbocker Aloysius Snake, also known as Professor Jailbird and Detention Bird, is a recidivist criminal, always getting arrested, but rarely appearing to stay in prison. He speaks with a "Valley Boy" accent and has a tattoo of a snake on his arm, which is presumably the source of his nickname. He is partial to fast cars and fast women, and has a knack for reckless abandon.

In a documentary by Declan Desmond showing the pasts of several Springfield citizens, a 13-year-old Snake is called "Detention Bird" by a 16-year-old Clancy Wiggum.

Snake referred to himself as "Professor Jailbird"; it was also revealed that he was formerly an idealistic Indiana Jones-type archaeologist, until Moe stole the Mayan gold coins that Snake had discovered and was going to donate to the museum, so he decided to take his revenge out on society (convenience stores)[1]. Snake also has a son named Jeremy. It is stated that Snake had previously spent time in a juvenile facility, suggesting he was a criminal before being an archaeologist[2].

It is implied by Otto that Snake was the one responsible for ruining Spinal Tap's concert [3].

Snake is constantly seen getting arrested, but never appearing to stay in prison. He speaks with a "Valley Boy" accent and keeps a cigarette pack rolled up in his sleeve. Snake has light brown hair. He is also 40 years old. His occupation is a criminal and a former professor and archaeologist. Snake is partial to fast cars and fast women, and has a knack for reckless abandon.

Snake's car's name is "Lil' Bandit," which is a Pontiac Firebird. It could be a reference to James Dean's so-called possessed car the "Li'l Bastard." It also could be a reference to the movie "Smokey and The Bandit" which featured a similar Pontiac Firebird used to escape police. It should be noted that the Lil' Bandit's horn plays the opening line of the tune Dixie, similar to The General Lee from the The Dukes of Hazzard.

Snake has a son named Jeremy Turley, who looks just like him. Snake has custody issues with Jeremy. Although Snake seems to have committed every crime possible, he is an extremely good father to his son. Snake's ex-girlfriend, Gloria, briefly dated Mr. Burns, but then came back to him. Snake and Gloria have been seen together many times and she is pregnant once. He was also implied to have a soft spot for puppies and other animals, as, after being given one of Santa's Little Helper's Poodle/Greyhound puppies, promises to take care of it (albeit in a similar manner to trying to kidnap someone), as well as rubbing it affectionately.[4] His exact views on kids besides his own have varied. Although he once tried to run over Bart in an alleyway during a police sting,[5] he once reacted with horror when, while trying to shoot at Chief Wiggum during a police chase, saw he had Maggie Simpsons in his arms and was noticeably horrified that he had nearly endangered her (as he and Marge accidentally mixed up his gun and Maggie, respectively, after bumping into each other during said police chase and trying to rush back home in time for Bart and Lisa to come home from school, respectively), and gave Maggie back to Marge while laughing sheepishly with her at the mistake.[6]

Snake can be seen wearing a Middlebury t-shirt under his trademark vest, suggesting he may be an alumnus[7]. Princeton however is the school most often referenced as Snake's alma mater.

Snake was once held captive by Herman, along with Chief Wiggum, but was eventually rescued by Kirk and Milhouse [8].

Snake once ran a telemarketing scam, but could not stick to it, because he didn't like bothering people at home. He also wrote the books, "The Ten Habits of Highly Successful Criminals" and "A Criminal's Guide to Hiding in Mexico."

Snake once had a tattoo on his back, saying "Snake and Gloria 4 Ever," but Homer changed it to "Never" [9].

In "Treehouse of Horror IX," Snake was executed based on a "three-strikes" policy. First, he burned down an orphanage, then he blew up a bus full of nuns (which Snake declared was "totally self-defense"), and finally, he smoked in the Kwik-E-Mart. His hair was then implanted into Homer's head, but it had to be removed, due to issues with the hair, instilling Snake-like characteristics into Homer, e.g. seeking revenge for Snake's imprisonment and execution by murdering Bart, etc.

In Dr. Hibbert's Island, he was a skunk.

The Simpsons Hit and Run

Snake briefly stole a military radio from Herman's Military Antiques (as he thought he'd get bobacious chicks with a military radio), but Bart managed to stop him. Snake was later arrested by Chief Wiggum when Lisa helped him uncover evidence of crimes under the three-strikes law (Counterfeit Designer Jeans, running over an elderly citizen without a permit, and littering, in that order) in exchange for information in regards to her missing brother. Later on, Apu reluctantly sought for his advice in regards to a potential lead to the source of the contamination of the Buzz Cola, as well as who was involved in contaminating it. Snake agrees to give him all he knows in exchange for Apu helping him do "community service" (which involved taking Garbage Pales and, later, destroying an Armored Vehicle), the second of which he truly gave info. His last appearance was when Homer ended up carjacking Snake (to which he notes the irony that he is the one getting carjacked), and ends up agreeing in order to not see Homer flip the bird at him. He survives the destruction of his car (he is seen to have jumped out). His car contained nuclear waste, and it was pulled into the Rigellians Tractor Beam.

Snake appears in a jail cell in the level Mob Rules, who can be busted out and can join Marge's mob to ironically protest the sale of a violent video game. 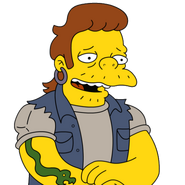 Retrieved from "https://simpsons.fandom.com/wiki/Snake_Jailbird?oldid=585787"
Community content is available under CC-BY-SA unless otherwise noted.