Tress MacNeille
Sophie Jensen is a student in Bart's class. She was created after a young girl named Sophie E. Jensen won a contest in her home state of Utah.

Sophie is often seen in the background in Bart's class and around Springfield Elementary. Her face often carries a look of discontent. Her hair is normally brown and she wears it in two pigtails.

Sophie is normally seen wearing a white shirt, a blue sweater over her shirt, long blue pants, and pink shoes. She has light brown hair in pigtails and utilizes white hair-ties to keep her hair in pigtails.

In "Lisa's Rival" she was seen wearing long red pants and a pink shirt, but she did have on her blue sweater. Her hair color was white during that episode, but her hair-ties were pink. In "Bart of Darkness" she wore an orange maillot.

Sophie Jensen in "A Test Before Trying".

Sophie in her original appearance. Clapping with Adrian and Nina.

Sophie falling with the others after the bleachers retract themselves.

Sucking on a cigarette candy with Nelson. 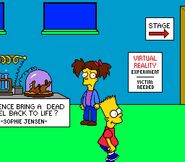 Seen in the game "Virtual Bart"

Seen wearing a pink jumper and a light pink shirt to the dance.

Sophie glares angrily at Milhouse with the rest of the class.

Glares at Martin.
Add a photo to this gallery

Retrieved from "https://simpsons.fandom.com/wiki/Sophie_Jensen?oldid=953638"
Community content is available under CC-BY-SA unless otherwise noted.