Specs and the City

"Specs and the City" is the eleventh episode of Season 25.

Mr. Burns gives all of the employees augmented reality glasses (a parody of Google Glass) to spy on them. Homer then uses them to spy on people and discovers that Marge sees a marriage counselor in secret. Nelson makes Bart locate the best Valentine's Day gift, but if Bart doesn't succeed in his task, Nelson is going to feed Bart to an electric pencil sharpener.

In a flashback from December 2013, a jolly Mr. Burns passes out Christmas gifts to his employees after Homer, Carl, and Lenny just finished discussing their boss's past not-so-great gifts. The employees at the power plant unwrap the gifts to find Oogle Goggles. Concerned with his employer's sudden kindness, Smithers wonders if he should contact Burns' doctor, but Burns lets Smithers understand that now all his employees can spy on each other. Furthermore, with a press of a button, Burns can kill an employee even though it doesn't really work when he tries to demonstrate it to Smithers. Fast forward to February 2014, when Marge encourages Bart and Lisa to join in the Valentine's Day festivities of making cards for everyone in the class. Bart stands against giving a card to Nelson, the class bully, who he doesn't love. However, Marge reminds him that everyone at his school is required to bring a Valentine for everyone in their class to and shows Bart an amusing video the school had sent out for encouragement with a kid who overdoses on candy hearts when he doesn't receive Valentine's Day cards.

As Homer heads out with his family, he notices that Ned Flanders' home is worth more than his home, so in order to up the value on the property, Homer snatches Ned's flowers and plants them on his yard. Through Homer's goggles, he sees that the value shoots up before Santa's Little Helper urinates on the plant. Value drops. During Homer's snuggle time with Marge, he cannot take off his goggles, prompting Marge to walk out on him. Homer desperately asks the goggles to find a gift for Marge under five dollars. Homer then asks the goggles to take him back in time to two minutes ago. In the morning, Marge flips pancakes in rage. When Homer decides to give up the goggles, he places the goggles on the lazy Susan before it lands on Maggie. Marge grabs the goggles and puts them on to which Maggie spits her pacifier at her in defiance.

Over at Springfield Elementary School, a line of kids waits to give Nelson a Valentine's card. When Nelson is ready for Bart to give him his card, Bart stands up to Nelson by not giving him one despite Bart already having one planned. Bart rips the owl card with a bad joke. The kids gasp. Gripping Bart's shirt, Nelson demands that Bart have a card ready to give to him in one week. Meanwhile, Homer appears at work without his goggles, but he soon realizes that he cannot live in a reality without them because when Carl saw him, he slapped Homer repeatedly. Homer looks for goggles in Mr. Burns's office only to find the room empty. Homer sees the monitors of all the employees doing anything but work. Homer also sees Marge wearing his glasses and feeding Maggie ice cream even though Marge had told Homer they had run out of ice cream.

Homer sits on Burns' cushy chair eating popcorn when Mr. Burns shows up asking, "Who are you?" and Homer says Mr. Burns. Mr. Burns apologizes to "Mr. Burns" and backs away from the chair and out of the office. Homer continues to watch Marge do her everyday errands, which includes visiting a counselor, who she vents to about her husband. Topics, like Homer's drinking addiction to his temper. Homer goes to Marge's appointment. Just as he is about to, he hears her exclaim at just how much the sessions help her out. He starts to think back and remembers all the really good deeds that seemed to happen to him on Wednesdays and all of the nice chores Marge did for him. Homer just can’t go through with the fallout.

Back at school, Bart hands a card to Nelson with the words "I fear you", stating that valentines day is more about the fear of repercussions if nothing is done rather then love. Nelson is overjoyed at this card and arm locks Bart into hugging himself. 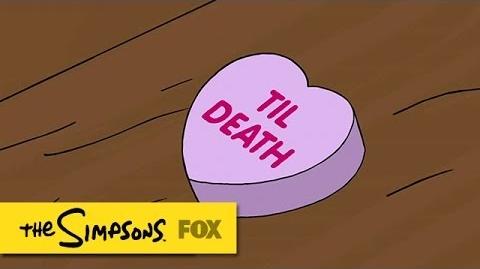 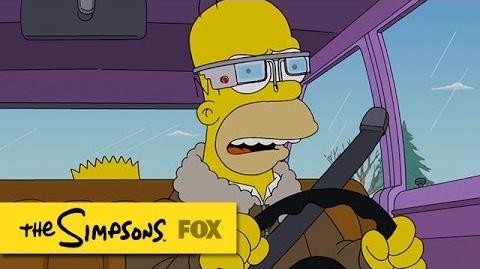 Retrieved from "https://simpsons.fandom.com/wiki/Specs_and_the_City?oldid=872848"
Community content is available under CC-BY-SA unless otherwise noted.