"She Used to Be My Girl"

Dan Castellaneta
Russi Taylor
SpongeBob SquarePants is a cartoon character from the Nickelodeon TV series of the same name. He is the main protagonist of the show and lives in a pineapple house in the underwater town of Bikini Bottom along with other sea creatures.

He was created by the late Stephen Hillenburg.

SpongeBob is a sponge-like creature from the cartoon of the same name. SpongeBob has been referred to several times:

In the opening credits of the episode "Pray Anything," SpongeBob is mentioned in Bart's blackboard gag, which says "SpongeBob is not a contraceptive."

In "A Star Is Born-Again," Ned Flanders says, "This movie is turning into SpongeBob NoPants."

In "She Used to Be My Girl," Lisa Simpson, needing a god to pray to, tells a newscaster she is praying to Jesus, Buddha, and SpongeBob. Then the camera shows heaven, where Jesus, Buddha, and crudely drawn SpongeBob are. Buddha asks Jesus, "Perhaps we should help?" and SpongeBob interrupts, saying "Screw her!," then laughs insanely, while Jesus shakes his head.

In “The Last of the Red Hat Mamas,” a kid who wears the same clothes as SpongeBob picks up an Easter egg.

In "The Wife Aquatic," Marge Simpson and Lisa go to an aquatic museum where there is an exhibit that reads "The Science of SpongeBob" and it shows a SpongeBob statue next to it. Patrick Star also appears as one of the mollusk photos.

In "Treehouse of Horror XX," a Frankenstein's monster was dressed in a SpongeBob costume.

In "Angry Dad: The Movie," Bart Simpson mentions SpongeBob when he claims he likes cartoons. He says: "I've always loved cartoons, going way back to the real early SpongeBobs."

In "Yellow Subterfuge," when Krusty the Clown's show is dipping in ratings, he asks Lisa for help; she suggests that he sell foreign rights to his show, saying that even SpongeBob did it. She shows him an Italian parodied version of SpongeBob SquarePants on her tablet called Spugna Roberto Quadrati Pantaloni ("Sponge Roberto Square Pants"). In the show, Spugna Roberto (a parody of SpongeBob SquarePants) gives a gift to Squiduardo Calamari (a parody of Squidward Tentacles) for his birthday; the gift is a landmine from World War II. Squiduardo declines the gift, and while he is talking, a non-anthropomorphic seahorse lands on the landmine's button, detonating it and blowing Spugna Roberto & Squiduardo to pieces. A female fish in funeral attire arrives at the scene and exclaims "Calamari?, Noooo...!!!" and starts crying. In the parody, Roberto lived in a watermelon under the sea, spoofing SpongeBob's pineapple house.

In "Brick Like Me," Comic Book Guy says that Bart's giant robot is made out of Batmobile, Hobbit-hole and SpongeBob LEGO play-sets. SpongeBob's pineapple from the Bikini Bottom Undersea Party set is clearly visible in some parts.

In "Treehouse of Horror XXIX," in the opening sequence, Fogburyport Fisherman asks Homer if he knows the most evil creature in the sea, and Homer replies "SpongeBob?"

In "The Way of the Dog," at the Dognitive Behavioral Therapy Institute, one of the dogs holds a plush that resembles SpongeBob SquarePants.

In "Treehouse of Horror XXXI," in the segment "Into the Homer-verse," when Homer was going to strangle Bart, he transforms himself into a SpongeBob Homer ("SpongeHomer") and other versions of himself. 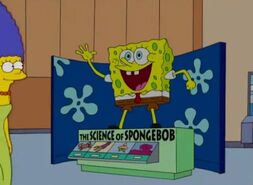 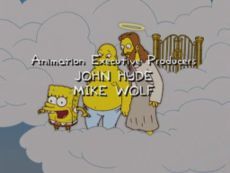 SpongeBob with Jesus and Buddha in Heaven 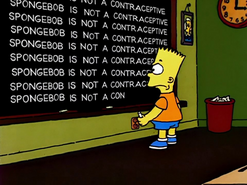 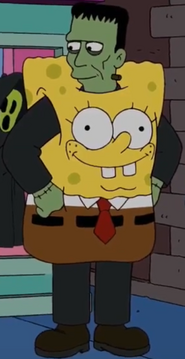 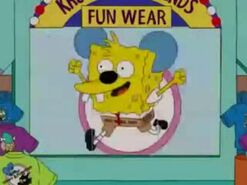 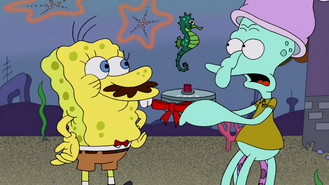 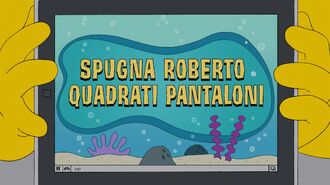 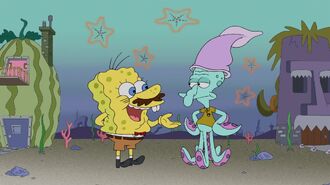 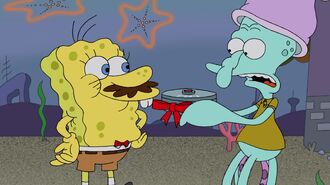 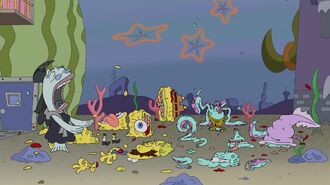 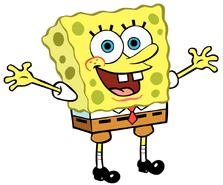 SpongeBob as created by Stephen Hillenburg 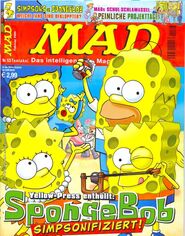