The Springfield Nuclear Power Plant is a nuclear power plant owned by Mr. Burns and is the main source of power in Springfield.

The plant is notorious for being poorly maintained, largely due to owner Charles Montgomery Burns' miserliness and safety inspector Homer Simpson's incompetence. A surprise inspection found over 340 violations with an estimated $57 million required to bring the plant up to code, money which Burns refused to spend. Notable safety violations that have been seen include luminous rats in the bowels of the building, pipes and drums leaking radioactive waste, the disposal of waste in a children's playground, plutonium used as a paperweight, cracked cooling towers (fixed in one episode using a piece of chewing gum), skeletons in the basement, dangerously high Geiger counter readings around the perimeter of the plant, flashing red alert signs being ignored by employees, the creation of a mutant subspecies of three-eyed fish and a horrific giant spider. The Emergency Exits are simply painted on.[1]

The core of the reactor is a Fissionator 1952 Slow-Fission Reactor. The plant has come close to meltdowns multiple times, but has always avoided catastrophe, often due to Homer's blind luck.

Security is also shown to be lax, as a ten-year-old spy from Albania disguised as a foreign exchange student named Adil took pictures and got information of the plant simply by asking Homer for a tour. Numerous times, the Simpson family have been able to break in easily, on many occasions shown to have keys hidden under fake rocks( on one occasion one even being shown inside).[2]

Sector 7-G is the location of Homer Simpson's workplace, used to help prevent a meltdown in the reactor core. Homer works on a T-437 Safety Console,[3] which displays many buttons and features, including a meter that shows the temperature of the core and a button that controls the emergency override circuit, which must be pressed in the event of a meltdown. It also contains a self-destruct button for the plant, which Homer, while asleep, once pressed.[4] Emergency doors lock down Sector 7-G whenever a meltdown is imminent. The doors directly behind the Safety Console lead to the Heavy Water Piping Facility.[5]

Sector 7-G was once referred to by Mr. Burns as a 'testicle-shriveling torture chamber' and the people who work there have at various times been classed as 'drones', 'organ banks','schmoles', 'carbon blobs','boobs','cabbage heads', 'seat-moisteners' and 'fork and spoon operators'. The radiation has been showed to sterilize workers, namely Homer.

This was another sector that was mentioned by Mr. Burns in the episode Take My Life, Please which is a better sector than 7-G with a higher payout. Chip Davis was described as "the life of Sector 6-F" but passed away prior to the episode Four Regrettings and a Funeral.

The plant has two Cooling Towers. They both appear the same color with the design of an atom with its nucleus and electrons pictured. Coffee mugs, pencil holders and other cylindrical based shapes can be seen around the plant in the style of the cooling towers.

The Executive Building, or Sector 22-F, is a building in the back of the power plant. It features a bowling alley, open bar, and maids. Accountants work here.

Mr. Burns' Office is located at the top floor of the plant. His office contains multiple trap doors that drop unwanted visitors far from the office (at least one of which contains a pool filled with electric eels;[6] another one contains alligators) and suction tubes from the ceiling that can send people to an area in the Middle East, which, according to Smithers, was there even before Mr. Burns worked at the plant.[7] Mr Burns' desk hides several buttons that can trigger the traps in the room, release attack hounds, and also call security.[8] There is a small array of security screens on the wall, and the bookcases conceal an escape pod and a germ-proof vault. Mr. Burns' office also contains a stuffed mounted polar bear, which conceals a secret access-way, or 'corpse hatch'/'innocence tube' which leads to the sewers. Mr. Burns used it to dump the body of Smithers' father after he died while preventing a core meltdown many years ago.[9] There is also a balcony behind a large window.

The Plant cafeteria is where the Nuclear Power Plant staff have their lunches. There is a rotating cake tray which is turned by a man pushing a lever on a giant wheel and axle a few meters under the Cafeteria.

A shower room where the staff members of the Plant wash themselves at the end of each work day. It was once shown that these showers have a tendency to spout fire.[10]

The Nuclear Power Plant has a large auditorium where awards to staff members are given and company-wide meetings are held.[11]

The Solarium is a glass garden room at the back of the power plant.

A break room where most staff spend their coffee breaks. The room is usually stocked with coffee and donuts. There is a bulletin board on the wall that has a poster showing how to perform the Heimlich Maneuver.[12]

Homer uses a deformed fish to gain entry to the room (the security machine mistook to the fish for Mr. Burns). Homer attempts to release a mixture of "spoiled milk and utility-grade chicken" into the air-conditioning system. He is stopped by FBI Agent Annie Crawford, but Lisa manages to trigger the machine anyway. It's all to no avail though as it is revealed the air-condition does not work.[13]

Ideas to Improve The Plant

When the Plant held a competition for children to come up with ideas for the powerplant, Frank Grimes tricked Homer into entering it. Some competitors who entered were Ralph Wiggum, who entered a dream house, and Martin Prince, who entered a futuristic power plant. Homer added flaps to lower wind, and red and green stripes (which he and Mr. Burns felt were pretty "sharp"). He eventually won, leading Frank Grimes to have an outburst over the stupidity of the plant. 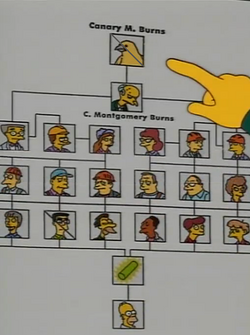 It is revealed that the plant is going to eventually upgrade the number of cooling towers (and possibly reactors) from two to at least five, perhaps as a response to the future growth of Springfield or its energy demand.[14]

A decade in the future, Lenny and Carl have been promoted to the executive board, while Milhouse Van Houten has become a supervisor. The plant is operated mainly by robots, but Homer still retains his familiar position at Sector 7G.

It is also known that it will have many lawsuits, as written in the billboard at the entrance ("Still operating, despite lawsuits").

The design and folly of Springfield Nuclear Power Plant is often rumored to be based on the real life Trojan Nuclear Power Plant near Matt Groening's home town of Portland, Oregon, or the Hanford Site in southeastern Washington. However, Antonia Coffman, Groening's publicist, has said that the Springfield plant's design is generic and that "the Springfield Nuclear Power plant was not based on the Trojan Plant or any other power plant in the country."[15] Trojan Nuclear Power Plant opened in 1976 and was infamous for its poor construction and maintenance, resulting in steam generator leaks which ultimately caused the plant to close in 1993 (although other plants replaced theirs). The cooling tower of the Trojan nuclear power plant was finally demolished on May 21, 2006.

#1021
Retrieved from "https://simpsons.fandom.com/wiki/Springfield_Nuclear_Power_Plant?oldid=542917"
Community content is available under CC-BY-SA unless otherwise noted.