"Treehouse of Horror VI"
The Springfield Orphanage is an orphanage in Springfield. Lindsey Naegle works here.

Selma considered adopting a child from here, but was empty at the time, because its real father soon appeared and took the baby away.[1]

It was also where an orphan named Charlie snuck out to become Bart's younger brother. Charlie is later returned to the orphanage and is adopted by a family with six girls [2].

The orphanage is rather destitute, and its structural needs are repeatedly abused by the Springfield Nuclear Power Plant, more importantly plant manager C. Montgomery Burns (who has joked that he will donate to the orphanage[3] and used up all of the building's extra energy to power Springfield during a heat wave[4]). 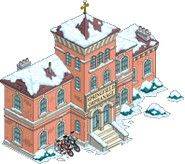 Tapped Out
Add a photo to this gallery

Retrieved from "https://simpsons.fandom.com/wiki/Springfield_Orphanage?oldid=949429"
Community content is available under CC-BY-SA unless otherwise noted.