The Springfield Subway System is an abandoned underground railway network running beneath Springfield. Although the trains are functional, they are no longer in use (at least in a part of the underground segment), due to the damage caused to buildings by the tremors of the moving train. However, an elevated segment is most likely still in use.  The tracks pass underneath Springfield Elementary School, and caused severe damage to the structure of the building when Bart and Milhouse operated one of the trains. Bart Simpson and Milhouse rode on the Subway in “Postcards From the Wedge” 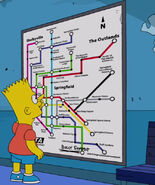 Bart looking at the map of the Springfield Transit Authority.

One of the subway stations

Retrieved from "https://simpsons.fandom.com/wiki/Springfield_Subway_System?oldid=896421"
Community content is available under CC-BY-SA unless otherwise noted.