Stacey Lovell is the creator of the Malibu Stacy franchise.

Lisa bikes to Stacy Lovell's house (built exactly like Malibu Stacy's dream house), she says she wants Miss Lovell to hear what Stacy is telling a generation of young girls.

Lisa and Stacy decide to create a new talking doll, Lisa Lionheart, voiced by Lisa herself and complete with her own encouraging phrases. The doll is quietly released, and even Kent Brockman (at the request of his daughter), spends his whole newscast talking about the doll, ignoring breaking news that the President was arrested for murder. However, the creators of Malibu Stacy view Lisa's doll as a real threat, and plan to sink Lisa Lionheart.

On the day the doll is officially released, numerous young girls (and Smithers) rush into the toy store at the Springfield Mall to buy Lisa Lionheart. As Lisa and Stacy Lovell watch, a cart of "new" Malibu Stacy dolls with a new hat is wheeled right into the path of the group running for the Lisa display. Lisa appeals to them that it's just the same doll with a new hat, but they all prefer to stick with Malibu Stacy (largely due to a phrase from Smithers, "but she's got a new hat!")...except for one little girl, who leaves with a Lisa Lionheart doll. Lisa remarks that even though they didn't sell out of the dolls, they at least managed to get through to one little girl. Stacy agrees, and mutters under her breath, 'Particularly if that that little girl happens to pay $46,000 for that doll,' suggesting her gloomy outlook on the financial success of the venture (and more-or-less confirming the executives' claim that her ideas were not cost-effective).

She lives in her own house, and is also the "Ego-Destroying Control Freak" type of mom you meet at the PTA.[1] 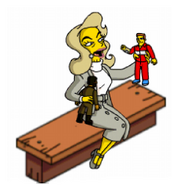 Stacy Lovell in The Simpsons Movie