Steal This Episode is the ninth episode of Season 25.

After getting kicked out of both the church and the theater, Homer learns how to pirate movies and, when Marge accidentally turns him in, he gets hunted down by FBI anti-piracy boss Detective Gratman.

Homer keeps hearing spoilers about a recently released movie, Radioactive Man Re-Rises. Tired of hearing spoilers, he plans to watch the movie with the family. At the theater, Homer is upset that the theater shows commercials and snaps at a woman for shushing him despite everyone else texting, sexting or bringing their babies to a late movie. Before getting kicked out from the theater after breaking the 3-D Glasses given to him. Bart cheers him up by showing Homer how to download the movie illegally from the Internet (the footage is censored by the 1987-93 Fox logo and footage from NASCAR's 2011 Goody's Fast Relief 500 race). Eventually, Homer plans to open a backyard theater that shows the illegal movies he downloaded on the Internet starting with a movie made about Judd Apatow's life which was made by him. Marge feels guilty after watching the movie since she is basically stealing with her own eyes, and plans to send a $12 check along with an apology letter to Hollywood to repay the money for the tickets she should have bought. The movie company at Hollywood receives the check (which the head uses it as a straw for snorting cocaine, before unraveling it) and reads the apology letter. He is alarmed and quickly calls the FBI and the department that specializes in combating movie piracy chooses to go after Homer after reading the letter.

When the FBI raids the Simpsons' house, tell the residents of Springfield the truth (which surprises them), bring down Chief Wiggum and arrests Homer for movie piracy, Deputy Director Gratman also announces that they managed to bust him thanks to a snitch. Marge turns away and begins to feel guilty after accidentally turning Homer in. The next night during dinner, she tries to explain to the kids that what she did was the right thing, but the kids agree with Homer, saying that what he did benefited the town, making Marge's guilt show even more. On his way to Springfield Penitentiary in the bus, the prisoners physically assault Homer and tells him what he did in pirating films is much worse than robbing a bank or doing drug trafficking. The prisoners are ready to kill him when the bus then falls into a ledge and lands on train tracks. The rest of the prisoners escape, believing the train is going to kill them. Homer is rescued by the train that was passing by, intentionally by one of the Springfield residents whom are grateful with his acts for letting them experience a new way of watching films and think the FBI are hypocrites. He then heads home where he reunites with his family. Despite Marge's pleading with Homer to do the right thing and turn himself in, he refuses.

Lisa takes the family to a Swedish consulate to protect Homer from getting arrested again since downloading movies is not illegal in Sweden, which further adds to Marge's guilt. The FBI lay siege to the Swedish consulate and attempt to drive the Simpsons out with music which doesn't work (the music they use is liked by the Swedish). A guilty Marge finally confesses to Homer that she was the snitch and admitted of writing the letter for expressing regret to the movie company in Hollywood for what happened. She hoped this would be plenty to put the entire mess behind her and Hollywood. Feeling betrayed by Marge for snitching on him, Homer willingly turns himself in and is taken into federal court.

During the trial (which the blue haired lawyer is against Homer), which is attended by various Hollywood filmmakers, Judd Apatow, and Seth Rogen, they testified against Homer for their actions. When Judge Apatow asks him if he has anything to say before he delivers his sentence, Marge encourages him to speak of his behalf and offers an apology for her actions. Homer delivers a speech about his movie piracy. The Hollywood filmmakers who attend the trial are impressed by Homer's story and chooses to drop all the charges and buy the rights to Homer's story to turn it into a movie.

A week before the movie premiers, the residents of Springfield give Homer a surprise special screening with the movie they downloaded illegally. Homer gets mad at them for illegal downloading since he now gets money from the movie profit and kicks them out from his backyard while telling them to see it when it comes out in theaters.

While watching the movie in the theater, Bart asks Lisa which side were the real pirates: the movie producers or those fighting for Internet freedom. Lisa says that both sides "claim their intentions are noble, but by the end of the day they are trying to steal as much money as they can". She then proceeds to say who the "real pirate" is, but is censored by NASCAR footage followed by a pirate flag and Seth Rogen's laughter. 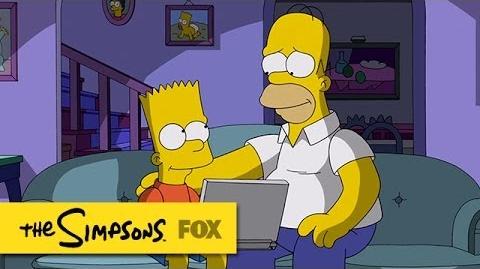 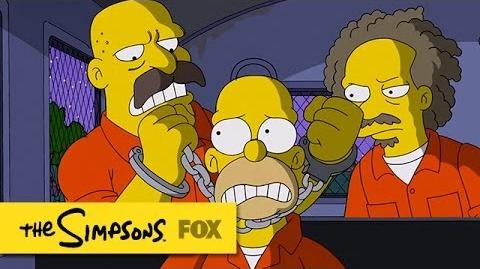 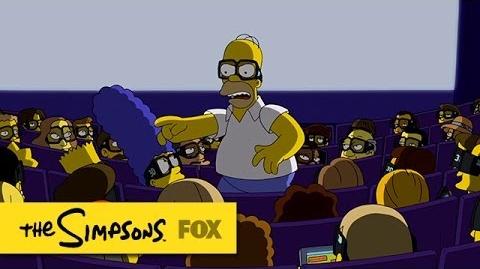 Retrieved from "https://simpsons.fandom.com/wiki/Steal_This_Episode?oldid=900685"
Community content is available under CC-BY-SA unless otherwise noted.