Himself
Stephen William Hawking was a British theoretical physicist.

He arrived in Springfield hoping to see the perfect utopia created by the local MENSA group who had taken control but was dismayed to see it was more of a "fruitopia". When the townspeople began destroying a gazebo, he flew in to rescue Lisa, who was trapped within. As well as a propeller, he also has toothbrush and extending boxing glove (which he uses on Skinner) attachments. He later shares a beer with Homer at Moe's Tavern and plans to steal his "theory of a donut shaped universe", before using his boxing glove to hit Homer when he refuses to pay the bar tab.[1] He was later shown in line to evacuate the Earth,[2] and appeared again,[3] and later used his propeller to get out of a corn maze.[4] He was also seen at Expressions, wearing gold jewellery, including a chain with the equation E=MC2 on, while spinning in circles to a song[5].

When in a parallel dimension, Homer reflects on his lack of knowledge of astrophysics. He says that he wishes to have read the book by "that wheelchair guy," referring to Hawking.[6] 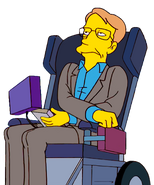