Sacred Order of the Stonecutters

The Stonecutters were a secret, ancient organization and a parody of the Freemasons. The Springfield branch, led by the all-knowing Number One, is featured in the episode "Homer the Great".

The Stonecutters meet on Wednesday nights in a large headquarters, and their activities mostly involve drinking beer and playing Ping-Pong. Members are identified by number rather than name, assigned by the order in which they joined. At least 907 members had joined before Homer. There are only two ways to gain membership: Be the son of a Stonecutter (the society is men only) or save the life of a Stonecutter.

The initiation rites mainly involved pranks and being spanked with paddles. The final rite is an oath, the last line of which states that if the secret society is revealed, then the teller's "stomach become bloated, and [their] head plucked of all but three hairs" (Moe suggests that Homer should take a different oath).

The society has two stones, which are attached by a chain shackled around the wearers neck, then dragged. The Stone of Shame is used primarily for banishment; tradition dictates that the wearer be naked. The Stone of Triumph is the larger of the two, and is used for Coronation ceremonies.

The rewards are vast: They include reserved roads, better parking spaces, wonderful chairs, free soft drinks, and swift house repairs. Stonecutters are also told the real emergency services number - 912. The membership pack contains stickers to stop their cars being towed or their wallets stolen by paramedics. Also seen are a society t-shirt, robes, underwear, handbook and secret handshake. They are also rumored to have an algebraic secret base on the Moon.

On the night of their 1500th anniversary, Homer Simpson (who got to join because his father was a member) accidentally destroyed The Sacred Parchment. He was about to be banished forever, when Number One noticed that he bore the mark of the prophesied Chosen One. Homer became their new leader, and they went out of their way to impress him and let him succeed at everything (by rigging various games in his favor).

Homer felt isolated, and urged that The Stonecutters use their power to help other people. The society got increasingly annoyed with the humanitarian tasks that The Chosen One (Homer) kept setting them, believing them to be illegitimate excuses to manipulate them into beings thralls to what they were believing to be a totalitarian dictator. The World Council suggested that Homer be killed except Bush who suggested instead to do something to Homer's voice box, but Moe suggested of them "not wanting to be Stonecutters no more". The society went ahead with this plan, and the The Ancient Mystic Society of No Homers was born.

In The Simpsons: Virtual Springfield, the Stonecutters, as well as their headquarters, make an appearance as one of the locations to visit.

In The Simpsons Road Rage, there is a Stonecutters lodge in the Springfield dam, where some people want to be driven to.

In The Simpsons: Hit and Run, you can drive through the secret Stonecutters lodge in the first and fourth levels. It leads to the Springfield Nuclear Power Plant. Homer can also buy the Chosen One suit. There is also a secret card in the tunnel that mentions the Stonecutters and the episode, "Homer the Great".

On June 3 2014, the Stonecutters were introduced to the mobile game. Prizes included skins for many of the characters who were in the organization, the table and the Stone of Triumph. The lodge and daycare were also added.

A card about the Stoncutters.

The Entrance to Stonecutters Hidden Tunnel

Homer the Chosen One

Homer with the stone of triumph 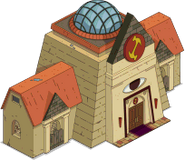 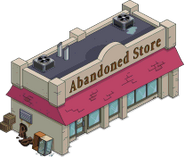