Stuart Discothèque, usually known as Disco Stu, is the owner of Stu's Disco. He is a disco aficionado and is usually featured wearing a rhinestone-encrusted leisure suit from the 70's and sports an Afro. The son of Doo-Wop Steve and Public Domain Debbie.

In "A Serious Flanders: Part One", he is killed after Kostas Becker uses him as a human shield at Krusty Burger. 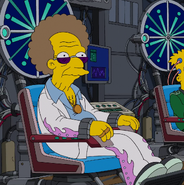 Stu in "Treehouse of Horror XXV"

Stu in the movie

Stu in "Treehouse of Horror XVI"

Stu in "Dangers on a Train" with white glasses