Mandy Moore
Tabitha Vixen is the wife of Buck Mitchell, and also a pop singer and celebrity in Springfield.

Tabitha appears at Buck's baseball game and sings the National Anthem, only to revert to singing one of her songs and stripping down to her underwear, which attracts the attention of all the male attendants and embarrasses Buck. After seeing Homer and Marge kissing on the Kiss Cam, Buck shows up at the Simpsons' front door the next day and asks for help with his marriage in exchange for season tickets. Marge thinks that this would not be a good influence for Bart.

Homer and Marge's sessions for Tabitha and Buck go well. However, after one of Tabitha's concerts, Homer comes to meet her in the locker room to check up on things. She offers him chicken, then asks for a neck rub, as his fingers are already greasy. He obliges, and the rub pleases her, causing her to moan loudly. Homer also moans, but only because of the taste of the chicken. Their moans through the door are overheard by Buck, who believes Homer and Tabitha are making love and angrily barges in, enraged. He instantly slugs Homer. Later, Tabitha goes to Marge and tells her that she is going to break up with Buck, Marge tells her not to and asks what attracted her in the first place, she says that Buck didn't just like her for her enormous breasts and slim physique; he also liked her for her hair.

Wanting to restore Buck's relationship with Tabitha, Homer hijacks the Duff Beer blimp and spells out a message to Buck during a game, supposedly from Tabitha proclaiming her love. Buck, reinvigorated, hits the ball into the blimp itself, causing it to crash into the field. As Homer alone runs from the wreckage, Buck realizes Tabitha had no part in the message. He charges at Homer, bat in hand, but Marge delivers a monologue over the loudspeaker, dissuading him. It also prompts Tabitha to tell Buck she wants to stay together.

Tabitha singing the national anthem, before and after changing her costume. 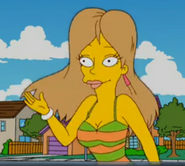