Not sure this is correct. "Fit Tony is a bigamist and philanderer, with at least two wives (including Selma Bouvier)" I don't believe he was actually married to Selma, was he? Wasn't that the whole point to the ending of the episode that she was his "goomar" or whatever that term for mistress was (sorry I don't speak mob).76.226.102.53 22:07, September 22, 2013 (UTC) 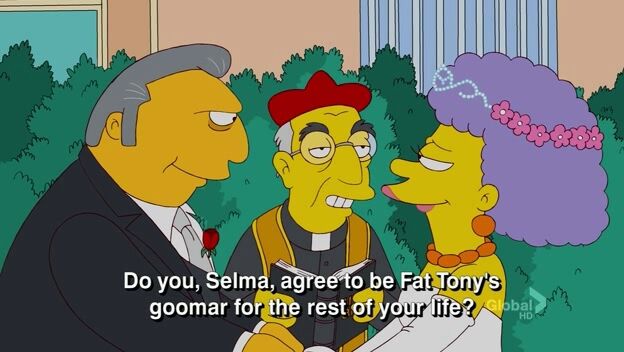 Why would Fit-Fat Tony's mother have a mailbox in Springfield if he is originally from San Diego? Marge may not be aware of that but presumably he would be... I suppose Angelica D'Amico could have started out in Springfield then moved to San Diego?

The shared surname of D'Amico between the cousins (and Fit Tony's mom, assuming these episodes happen in chronological order... if they don't then it would be hard to tell what is Fit>Fat Tony new events or origFat tony flashbacks) if we assume Fit Tony's mom got it through marriage is that Fit Tony's dad and Fat Tony's dad were brothers? talk2ty 15:33, March 20, 2018 (UTC)