"The Bob Next Door"

Dan Castellaneta
Ted Flanders is a member of the Flanders family.

He moved next door to the Simpson family after Sideshow Bob (disguised as Walt Warren) was sent to jail, much to Homer's anguish. He speaks just like Ned (e.g.: neighborino), and he also looks like him, too. He may be Portuguese. He currently lives in 740 Evergreen Terrace. He has two girls, named Connie and Bonnie, whose names rhyme, like Ned's sons.

It's possible that he is a widower, like Ned Flanders. 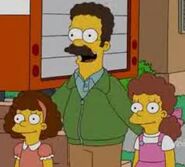 Ted and his daughters Connie and Bonnie.