"The Complete Fifth Season" was released on December 21, 2004 in North America, in the UK and Ireland on March 21, 2005, and on March 23, 2005 in Australia. It contains all 22 episodes from season five, and has the memorable extra-long circus couch gag as its main packaging theme. The spine features Bart and Principal Skinner on the outer casing, and Lisa and Groundskeeper Willie on the inner casing.

The main menu format features a picture at the top half of the page based on an episode it contains, with various things happening in it relating to the other episodes. The bottom half of the page contains each episode with a "play" button next to it, and a "plus" button that goes to the episode's menu. Each episode's menu is exactly the same way. Sealed copies sometimes came packaged with a "Includes the 100th Episode!" sticker. 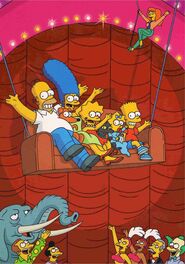 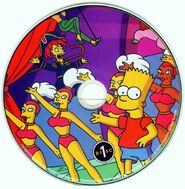 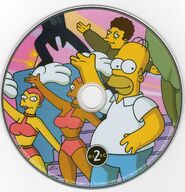 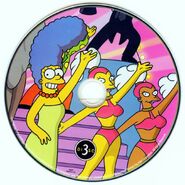 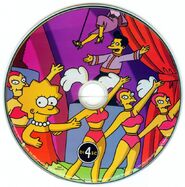 Disc 4
Add a photo to this gallery

Retrieved from "https://simpsons.fandom.com/wiki/The_Complete_Fifth_Season?oldid=897461"
Community content is available under CC-BY-SA unless otherwise noted.