The Complete First Season is the home video release of Season 1 of The Simpsons. It was released on DVD on September 25, 2001 in Region 1, and on September 24, 2001 in Region 2 and 4, and contains all thirteen episodes from the first season, remastered in Dolby Digital 5.1. Although the video quality is generally of a high standard, it is from a broadcast tape and not an original film print, as the show was edited on video. The first season DVD quickly became the best-selling television DVD in history, although it was later overtaken by the first season of Chappelle's Show.

The outer packaging is of the family sitting on the couch with Santa's Little Helper and Snowball II sitting upright with them (used a couple of times in Season 1), whereas the inner packaging and the discs feature the family spinning in a vortex. The spine features Bart and Lisa on the outer casing, and Homer, Marge and Maggie on the inner casing.

The Call of the Simpsons - Chapter Selection Menu 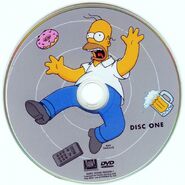 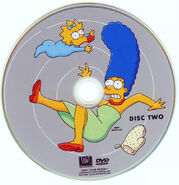 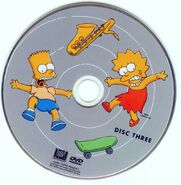 Disc 3
Add a photo to this gallery

Retrieved from "https://simpsons.fandom.com/wiki/The_Complete_First_Season?oldid=854636"
Community content is available under CC-BY-SA unless otherwise noted.