"The Complete Sixth Season" was released on August 16, 2005 in North America, September 28, 2005 in Australia and October 17, 2005 in the UK and Ireland. It contains all 25 episodes from season six. The recurring style of the booklet that came with each box set was discontinued, instead being incorporated into the theme of the box. The spine features Mr Burns and Chief Wiggum, for the first time being on both the outer and inner casings, as was to continue through to season ten. The Sixth Season's overall theme is "Who Shot Mr. Burns?", the first ever Simpsons cliffhanger, while the booklet theme is that of a police investigation file. The menus continue the format from The Complete Fifth Season. The 'window' in the outer box that shows the inner casing was carried on from the couch gag sets to the regular-shaped box sets for the sixth through tenth seasons. This is the first season of the show that does not use a picture of the family on television on the front cover. 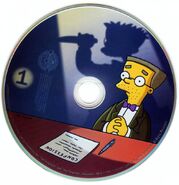 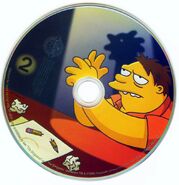 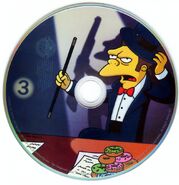 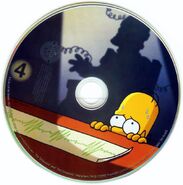 Disc 4
Add a photo to this gallery

The menus for the Complete Sixth Season DVD are very similar to the menus from The Complete Fifth Season, but the menus for this season are based on "Who Shot Mr. Burns". On the main menu, each episode is represented by the main character for the episode, and are lining up against a police lineup chart. On each disc, there are several unique menu animations, as described below. There are also mugshot animations for each episode, and a couple with Mr. Burns in the scene selection menu:

Characters: Krusty (Homie the Clown), Bart with a large boot (Bart vs. Australia), Homer (Homer vs. Patty and Selma), Barney (A Star is Burns), Future Lisa (is 23 years old and wearing her wedding outfit; Lisa's Wedding), Santa's Little Helper (Two Dozen and One Greyhounds), and Skinner (The PTA Disbands).

The new design model for Season 6 has sparked controversy among Simpsons DVD collectors. Most do not have a problem with the box itself, the problem stems from the fact that a sense of uniformity in the DVD collection is now lost. However, there have also been complaints that the plastic is weak and tends to wear down quickly.

A flyer included in the set directs purchasers to a website which allows those disaffected with the "Homer's Head" design to receive (for $2.95 US or $4.95 CA shipping) a box for the season which will be uniform. The website (and flyer inside the DVD set) is vaguely and humorously insulting to consumers who are "afraid of change" and are "anal-retentive nerds who want their DVD boxes to line up on the shelf." The website no longer exists.

It was announced on August 25, 2005 that the UK release on October 17, 2005 would have two covers - the Homer head would be limited edition and only 50,000 would be released. The alternate cover art was speculated to also be the USA alternative cover art. Copies of the alternative box began arriving to the USA in late September 2005, and it was indeed the black 'Homer magnifying glass' box. However, there have still been complaints - the fact that it doesn't have a couch gag, that the 'Homer head' innards must be placed inside, thus it is different from past sets, the fact that the box falls apart easily and that, overall, it is not an "old-style just-like-before box" as the flyer quoted. Recent copies of the Season 6 box set are issued using the regular box configuration, though with better build quality and normal box innards that match those of other seasons. However the old-showing box was re-released on June 26th, 2007.

Retrieved from "https://simpsons.fandom.com/wiki/The_Complete_Sixth_Season?oldid=897517"
Community content is available under CC-BY-SA unless otherwise noted.