The Devil, also known as Satan and Lucifer, is in charge of Hell. The Devil sometimes manifests as Ned Flanders,[1][2] but has often manifested in other forms, such as the Herman lookalike fawn in season 2. His manifestation in Ned Flanders is sometimes considered as a separate character, Devil Flanders. He often appears in visions or dreams. Whenever Charles Montgomery Burns has a near death experience, Satan tries to get Burns there, but continually fails. He also appears in the music video Deep, Deep Trouble after Bart ends up with him. Bart was ordered to be reincarnated but as a snail.

A giant advertisement statue in the image of the Devil was seen in "Treehouse of Horror VI" where it came to life with the other advertising characters and was convinced by Bart Simpson to destroy Springfield Elementary School. 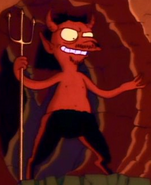 The Herman look-like Devil as seen in Season 2 and the music video, Deep, Deep Trouble.

The Satan Devil as a 50-foot eyesore (advertisement statue that had come to life).

Devil in "Treehouse of Horror XXII"

Devil trying to get Marge

The Devil torturing Homer in Treehouse of Horror XI

As an actor making out with Charles Darwin