The Fight Before Christmas

The Fight Before Christmas

"The Fight Before Christmas" is the eighth episode of Season 22. This is a Christmas episode in the style of Simpson Christmas Stories.

Bart is nettled because he didn't get the dirt bike he asked for over the last three years and vows to stay up until midnight to shoot Santa. He falls asleep later and dreams that a train (In a parody of The Polar Express), driven by Otto Mann, lands in front of the house and flies him to the North Pole. After Bart works his way up the corporate ladder, he is able to meet Santa (Krusty) who has run out of money since giving away free presents and getting cookies in exchange is not a sustainable business. Bart chooses not to shoot Santa and as soon as he walks out, Santa throws a big party in his office. Taking off, the train is chased by police cars. Otto jumps off the moving train, leaving Bart stranded on board.

In Lisa's dream, it is WWII as Marge is fighting while Homer is taking care of the kids. During Christmas, Homer buys a Christmas tree to the despair of Lisa who is traumatized because last year she went to buy a tree with Marge only to find out that her mother was called to war. As soon as Homer gets the tree Marge is reported MIA. Marge's war scene ends with a reference to the theater act from the film "Inglorious Basterds" after which she goes back home to her family. It is then revealed that this segment was just a dream that Lisa had.

In Marge's dream, she receives a night time visit from the most powerful force in the universe who teaches her the 'true meaning' of Christmas: Martha Stewart. She helps her decorate the house but everyone but Marge isn't having fun and so Martha Stewart makes it all disappear.

In the final segment, Maggie sleeps with a "Fluppets" videotape and dreams that the family appears as puppets (as a parody of the Muppets) in a theater as they prepare to leave for Hawaii, leaving Moe to take care of their place, in the company of his girlfriend, Katy Perry. In the end of the episode, Mr. Burns arrives telling everyone he has received a visit from three spirits making an allusion to "A Christmas Carol". And finally they sing a rendition to "The Original, Unabridged 39 Days of Christmas".

When Marge (in Lisa's Dream) goes into a movie theater to fight Hitler and his officers, they're watching a movie about a flying elephant attacking England (bombing Big Ben and throttling Churchill). While it's revealed that part of her dream was influenced by a toy elephant, it's possible it could be a reference to Dumbo, a Disney animated film that also premiered in WWII. However, one difference is not only that 'Dumbo' is fighting England for the Nazis instead of living as a circus elephant, but also that the dream sequence takes place in 1944 (the near end of the war), while the real Dumbo movie premiered in 1941 (the year America first entered the war after Pearl Harbor).

Bart and Milhouse as Nutcrackers 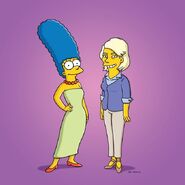 The Simpsons and Katy Perry

The episode as a whole has received mixed to positive reviews from critics. AOL TV's Brad Trechak wrote that it "showed a level of imagination that the recent Halloween episodes have been lacking" and that it "started good and got progressively better," Todd VanDerWerff of The A.V. Club, on the other hand, commented that the segments "got weaker as they went along". He added the episode "wasn't awful, and it did have some solid laughs, but the quality of the segments was decidedly hit and miss." These two critics both praised Bart's dream for being funny and Lisa's dream for its Inglourious Basterds parody. They had different opinions on the last two sequences, though.

Trechak thought Stewart "really shone in [Marge's dream], playing some sort of parody of herself crossed with Mary Poppins and Satan," and singled out the live-action sequence as his favorite because he is a fan of Jim Henson, the creator of The Muppets.

VanDerWerff commented that "Marge's visit from Martha Stewart was one joke stretched too far, and the final segment with the Muppet Simpsons was far too stilted."

Several other critics have commented on the live-action sequence. Mediaite's Tommy Christopher wrote in a column that the episode was "capped off by a pitch-perfect parody of The Muppet Show, but veered into adult humor that would make the Muppet-inspired pottymouths of Avenue Q blush." He commented that the part where Moe thinks he is kissing Perry's bellybutton and she tells him not to stop "has got to be a first on network television, breaking the dual taboos of oral sex and puppet-on-human conjugal bliss." The segment was praised by Germain Lussier of /Film, who gave it as an example of how the show, "every once in a while, does something so outrageous, we all step back and marvel at their brilliance."

Joyce Eng and Kate Stanhope of TV Guide named the sequence the second top television moment of the week.