The hounds are Mr. Burns' dogs. He continuously releases them on trespassers and people who irritate him. Mr. Burns has a button in his office for releasing them. Mr. Burns mostly releases them on his low level employees from the Power Plant, including Homer Simpson. Mr. Burns has released them on almost every member of the Simpson family, including Homer and Bart. There are 5-20 dogs in the group of both genders. One of the longest serving dogs is named Crippler. They have become a trademark and symbol of Mr. Burns' hate and power. In the episode "Dog of Death", Santa's Little Helper was for a short time, one of the hounds. Although he generally releases them on people he hated, at times, especially if he was in a very pleasant mood, he only releases one hound to chase his guest out. One example of Mr. Burns only releasing one hound is in Thursdays With Abie.

They also appear in The Simpsons: Tapped Out when Mr. Burns walks them. 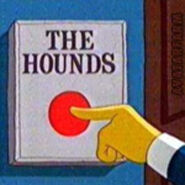 Waylon Smithers with the hounds on leashes.

The hounds reuniting with Mr. Burns after the dogs' takeover of Springfield.
中文
Community content is available under CC-BY-SA unless otherwise noted.