"When Bongos Collide!" (comics) "I Am Furious (Yellow)" (TV series)

The Ingestible Bulk is what Homer became when he was made angry by Bart. He fell into a pool of green paint and ripped his clothes. Stan Lee saw him and said that he was the Hulk, not Homer.

Homer becomes The Ingestible Bulk when he was affected by a nuclear explosion.

He is obviously a parody of the Hulk although in the episode he is simply referred to as "the Incredible Hulk".

The Ingestible Bulk as he appeared in "I Am Furious (Yellow)" 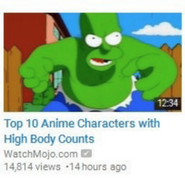 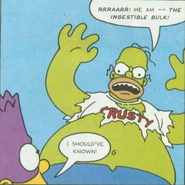 Retrieved from "https://simpsons.fandom.com/wiki/The_Ingestible_Bulk?oldid=903500"
Community content is available under CC-BY-SA unless otherwise noted.