The Kid is All Right

The Kid is All Right is the sixth episode of Season 25.

A new student named Isabel Gutierrez comes to Springfield Elementary, who is Lisa‘s intellectual equal. Lisa and Isabel become fast best friends but matters take a left turn when they realize they have different political views - Isabel is a Republican.

They run against each other in the second-grade election, and then we flash to the future where they are engaged in an actual presidential debate - and Anderson Cooper is the moderator.

At the beginning of the episode the Springfield Elementary students are on the playground, Lisa soon comes out of the school sad (as usual) that she doesn't have a friend like everyone else and she begins singing the song "One" by Harry Nilsson. After she walks back into the school because of the rain, Bart starts shooting spitballs at her. However she loses him by running into the library. While looking at a book she meets Isabel Gutierrez, a new student in the second grade. The two soon find that they share a lot in common.

Later that night Lisa gets a call from Isabel and the two begin to talk to each other about their family lives. Isabel suggests that they work on their Franklin Delano Roosevelt projects together, seeing as how they both chose the same topic. Lisa then quickly agrees to the idea. The next day at school Isabel and Lisa are presenting their work on FDR, Lisa begins to notice something different about Isabel, who tells everyone that the New Deal was against America's tradition of limited government. She even further comments that it was unconstitutional. Then Isabel reveals that she is a Republican and it becomes much of a shock to Lisa, who is a Democrat. After Lisa questions why someone of her heritage would be a Republican, Isabel also states that she is a "non-observant Jew" from Argentina. When Bart responds with his famous catchphrase "¡Aye, Caramba!", Isabel asks if he knows what the phrase means, he guesses by saying, "There's a caramba in my eyes?" She then explains that when translated to English, it means "Hot, Damn", and once again he says "¡Aye, Caramba!"

Later at home Lisa tells Marge that Isabel isn't what she thought because she is a Republican. So, Marge plans to takes her into the attic and show old photos of herself campaigning for Reagan. Marge tells Lisa that it was a phase she went through in the 80's, and some people people like Isabel and herself change their views on certain subjects as they get older.

Back at school, Lisa is looking at another book in the library when she sees Isabel again, the two apologize then to one another. The girls explain that their mothers just believe the other child is going through the opposite political phase. Isabel says that conservatives only get more conservative and that there is no phase, while Lisa suggests that it doesn't matter and they should play Monopoly instead of arguing. Isabel reveals that her father owns a monopoly, and they hug. However the two are unaware that they are being watched by the Springfield Republican Party, who are planning to recruit Isabel to their group. The next day at school, Lisa signs her name for class representative and finds that she will be running against Isabel and Ralph. Isabel and Lisa talk about the election, only to be caught up in the middle of a conversation with Nelson, who makes a reference to his past relationship with Lisa. As Isabel goes to her locker, she is surprised to see Mr. Burns shoved in there.

Mr. Burns takes Isabel to Phineas Q. Butterfat's Ice Cream Parlor, along with Krusty, Rainier Wolfcastle, Count Dracula, and Gary Chalmers, who try to convince her into joining them. Isabel turns them down, stating she would rather do it herself and she leaves. However, Mr. Burns knows he can rig the election with his money, like he payed People Magazine to make him the "Sexiest Man Alive".

The next day at school, both Lisa and Isabel are surprised to observe many campaign posters all over that say, "Vote Isabel." Isabel claims she has nothing to do with the signs, as it was all done by Mr. Burns' Republican group, and she chooses to go along with the glory.

While Bart is sleeping, he wakes up to find Lisa shooting spitballs at him at the foot with four toes and one heel of his bed. She asks Bart to get revenge on Isabel for cheating her way through the election. Bart plans to make dodge balls with Isabel's face on them, discouraging the students to vote for her. He also has a practice debate with her, where he pretends to be Isabel "with a wig," and Milhouse is the judge. When Bart takes a video of Isabel riding a bike with training wheels, Lisa worries she is turning evil like Mr. Burns when she says his catchphrase "excellent". She plans to win the election fair and square, so she fires Bart.

At the real debate, Lisa and Isabel make strong points, getting the other kids thinking about who they should elect. Later that night, Lisa is visited by a few Democrats in her dream, they convince her to accept the fact that she may lose and to try to be supportive of her new friend. Isabel wins the election leaving Lisa sad; however Bart and Milhouse cheer her up by stating that, "53% of the students would have voted for a liberal, just not Lisa".

The episode finishes with Lisa and Isabel at the 2056 presidential election, with Lisa responding to Anderson Cooper (character)'s question about getting America out of Afghanistan, by saying she would throw in the towel and make Afghanistan a state. Homer, who is watching the election on television, along with his Musicville counterpart, Hoba, proudly exclaims, "That's my girl". 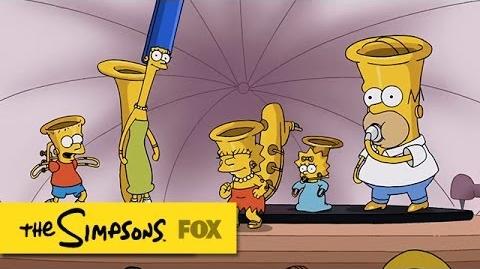 Retrieved from "https://simpsons.fandom.com/wiki/The_Kid_is_All_Right?oldid=927435"
Community content is available under CC-BY-SA unless otherwise noted.