Bart was eating a bowl of Krusty-O's for breakfast. Unbeknownst to him, there was a jagged metal 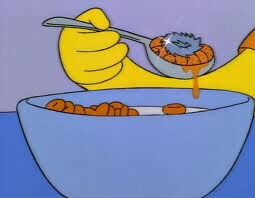 Krusty-O in his bowl. Bart swallowed the jagged Krusty-O and contracted appendicitis.

Later at school, he begged his teacher to let him go to the nurse. After a couple dozen seconds of a small nail manicure (and enjoying Bart being in pain), Mrs. Krabappel finally excuses Bart. As he entered the office, he noticed something shocking. Instead of their normal nurse, she was replaced with Lunchlady Doris. Bart asks her if she could provide any treatment to his wound, but she tells him all she can do is proscribe him two varieties of 'Chewable Kid-Friendly Prozac'. Bart, knowing neither of the pills would work, collapsed to the ground.

After coming to, he realized he was in the hospital, and was then put back to sleep by Dr. Nick so they could operate. When he came to again his entire family was around his hospital bed and noticed the pain had stopped. Dr. Hibbert told him that they had to extract an organ from Bart's body and he looked at his stomach. There were stitches. But also in there were several of his friends (and classmates) visiting him. Bart told him that he got a couple weeks off school, and that eagered the children to ask Dr. Hibbert to get an organ taken out of them. The doctor allowed them, and signed them up.

Bart later wins $100,000 from a lawsuit but Lional Hutz swindles most of it and Bart only gets $500, and tries to think of something to do with it. Later on, he notices Lisa walking out of The Android's Dungeon, and decides to make her happy. He asks Comic Book Guy what Lisa wanted, and he pointed to a record of Bleeding Gums Murphy's song called, "Sax on the Beach". He decides to use the $500 on the record.

Later, Bart shows the record to Lisa, and they hug. Lisa questions where Bart got the $500 afterward.