"Nobody reads these anymore."

“I'm gonna lock you up till frogs do fractions!”
―Judge Constance Harm

"The Parent Rap" is the second episode of Season 13 (originally going to be the Season 12 finale in production order).

Bart appears in court to pay for an embarrassing joyride in the police chief's patrol car, but just before he is set free, a second, vindictive judge named Constance Harm assumes the case and sentences him to the worst kind of detention imaginable: being tethered to Homer around the clock.

After missing the school bus, Homer takes Milhouse and Bart to school. Homer hears on the radio an announcement for a KBBL's "Prize Possie" radio contest, and whoever gets spotted with the radio station's van and has a "KBBL Party Penguin" hanging from the car antenna wins a prize of $40. Immediately after the announcement, Milhouse spots the van crossing traffic. Homer then abandons Bart and Milhouse on the side of the road and sets out to chase the prize van. The boys start to walk to school by themselves, until they notice Chief Wiggum's squad car. They get inside and play around in the front seat, but accidentally shifts the car in neutral after being threatened by the squad's canine in the back seat. After crashing the police car into a tree, Wiggum puts Bart and Milhouse in custody, assuming they used the car for a joyride.

In juvenile court, Milhouse gets his case quickly dismissed for Judge Snyder believes that "boys will be boys". Bart, not worried about any punishment as he believes that Snyder is "the good judge", comes up to face his trial. Snyder is just about to let Bart free until the judge's vacation has started. The replacement judge, Constance Harm, isn't a pushover, and is just about to sentence him to juvenile detention, but after realizing that Homer was the one who abandoned Bart in the first place, she orders that Bart and Homer be tethered together for the time being.

At first, both of them are unhappy about the punishment, but after the pair attend school and work together, the two begin to bond. The bond ends shortly as the tether start to affect negatively on their lifetime antics; such as Homer forcing Bart to stay out of Moe's (since there are no kids allowed in the bar) and refusing to get up from the couch when Bart wants to go to the bathroom. Eventually Homer and Bart get fed up of being tethered after Bart almost having to sit through Homer and Marge having sex in their room. Marge realizes they shouldn't have sex with Bart around and don't want him to see them "expressing their love" Homer argues that kids are very visual these days but Marge says no. Homer argues further but Bart interrupts and says, "the lady said no" Homer tells him to shut up. But Bart's says "you shut up" This resulted a fight between Homer and Bart causing Homer to strangle Bart by tying the tether around his beck but Bart grabs the tether and whips Homer's backside, finally provokes an angry Marge to cut the tether. Unfortunately, Judge Harm catches them through firewall cameras in the tether rope; Homer then attempts to explain the events, but this only made Harm more furious. Deciding that both Homer and Marge are unfit, Judge Harm has Homer and Marge put into wooden stocks and punishes them by making them bend over by the road so people can drive by and spank them (or in Nelson's case, whip them). Eventually, Homer and Marge use Ned Flanders' table saw and candle to break free. In retaliation, they go to Harm's houseboat to put up a "Big Meanie" banner across her front door. Just when they were about to leave, Harm's pet seal Poncho alerts her. Homer attempts to throw a cinder block at her head, but misses and instead hits her houseboat by mistake, therefore sinking it, much to Harm's distraught.

Homer and Marge are brought before court again, where Judge Harm personally plans to have them locked up for destroying her houseboat. However, Bart interrupts the trial and confesses that he should be the one punished, not his parents. Harm's harsh expressions briefly softens and she admits that she appreciates his honesty. However, Harm reveals she still must lay down the law. She is ready to punish Bart and send him to juvenile hall when Judge Snyder's vacation ends, putting him back on the case. Snyder moves for a motion that "boys will be boys" and dismisses the case. Judge Harm tries to protest against it, claiming Snyder has always been too lenient and she is sent on her way. On their way home, Marge makes the family promise that they will not violate the law for a year. Homer immediately breaks the promise by unintentionally running over Hans Moleman. 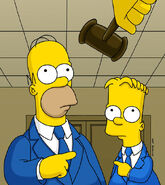