The Simpsons Arcade app was released on iOS in 2009. The story begins with Mr. Burns, Mayor Quimby, Krusty, Smithers, Chief Wiggum, and many of Springfield's other celebrities creating an all-powerful thumbdrive, which they insert into a donut and entrust with Smithers, who walks out and immediately crashes into Homer. Smithers gets away with the donut, but not without attracting the pursuit of Homer. Smithers sets several goons on Homer and drives away. The player controls Homer Simpson, who can punch, jump and walk around Downtown Springfield. Also, if he punches while in the air, he will flip onto his back and shake the ground with his landing, causing any goons nearby to fall over. This does not take away any of their health, but Homer now has the ability to sit on them with the

punch button, which does hurt them. Homer has three lives, along with a health bar. If the goons punch him enough, his health bar will empty and he will fall over. It is then the player's job to slap him until he awakens. When he does, all the goons are in exactly the same spot as where he left them, and he can continue to fight.

The player progresses through a multitude of levels, including Downtown Springfield, Springfield Mall, Channel 6 Studios, Krustyland, Republican Party HQ and the Nuclear Power Plant, fighting Bosses such as Chief Wiggum, Jeremy Freedman (Squeaky-voiced teen), Bumblebee Man, and others. Homer also finds crates scattered throughout the levels, which when

punched, give Homer temporary weapons or power-ups. Weapons include a carbon rod, an exploding barrel, and a taser, all of which several goons possess. The power-ups are badges with a picture of a Simpsons family member, such as Marge or Bart. If Marge's power-up is found, the goons pause while Marge runs onto the screen with Maggie, who hits Homer on the head and causes him to rage. Marge and Maggie run away as Hom

er continually rotates his outstretched fists. The player, instead of using the touch-screen joystick to move Homer, now has to tilt the device to move Homer around. If Bart's power-up is found, Bart skateboards onto the screen and jumps on Homer's back, then continuously shoots his slingshot for a short while. 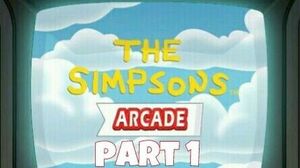 The Simpsons' Arcade (mobile) is a classic beat-em-up style game. It is similar to The Simpsons Arcade Game released in 1991 for the arcade, the Commodore 64, the PC, and the DOS.