“The Wandering Juvie” is the sixteenth episode of Season 15.

When Bart scams the town for wedding presents, he is sent to a Springfield Juvenile Correctional Facility. While tethered to female inmate, Gina Vendetti, he escapes the facility.

When the Simpson family is at Costington's department store, Marge tries out some beauty creme, Lisa finds clothes that are too inappropriate for her while Homer after accidentally getting his shoelaces caught in the escalator accidentally mistakes a dressing room for a restroom. Bart picks up a barcode scanner pretending it's a gun, the store explains that it's a barcode reader and you use it to scan items for registration. Bart uses the wedding gift registry as a prank to register himself and his bride, "Lotta Cooties", for wedding presents. Bart invites many people to his so-called "wedding" and plans to take all the unused gifts back for store credit. Many people who know him had fallen easily for it (even though it had his name on it), but he is stopped in his tracks and gets arrested by Chief Wiggum. Bart tries to bribe Wiggum with the wedding presents, but Wiggum only accepts cash bribes, as stated on his badge. Because of his "wedding" prank as well as his incredibly strong record of bad behavior, Bart is sentenced to six months of juvenile detention by Judge Constance Harm. At first Marge tries to clutch Bart but they replace Bart with Ralph.

At the detention center, Bart is being bullied by practically all the boy inmates and is miserable. While outside, he leans against the fence of the female juvenile hall, Gina Vendetti among other girls (she threatens to make his puberty very boring while wielding a penknife). When the family visits Bart he tells them how bad it is in there. Homer has now taken the job of being a prison guard to protect him. Unfortunately, his shift ends until two weeks from that day. Bart has another problem when he is partnered with Gina for the "prom". While they are dancing, Gina thinks of a way she can escape, but due to the fact that they are handcuffed together, she automatically brings Bart along since he has been convinced to go along since she kissed him. They are on the lam and try to go far away, even pointing out that she can convince the police that this was his fault. That night, a news report comes on saying that Bart and Gina have escaped, Lisa is confused because was supposed to be released anyway in two weeks. Not wanting his son to get hurt Homer declares they will look for him. Bart asks Gina how she ended up in juvie, she reveals that she pushed a princess off the parapet at Disneyland castle. Overtime Bart and Gina start to like each other and the next day they look for a blacksmith who can remove their cuffs. Eventually, they are freed, She gives him a goodbye kiss and Bart asks if they'll see each other again, but she punches him in the stomach and leaves. At first Bart thinks that she is crazy but shortly after he finds Gina is alone and forlorn, as it turns out she has no family. At first Bart tries to cheer her up but she angrily attacks him saying he doesn't understand where she yells at Bart and he calls her a psycho.

They engage in a brutal fight and Bart is so furious that he actually wants to kill her as much as she wants to kill him this time. However, just before they continue, the police arrive and arrest them, telling the rest of the Simpsons that Bart will now be in Juvie even longer. Gina, feeling terrible, confesses that she does not have a family when she returns to jail (also clearing Bart of all charges that would result in him remaining in prison), but when she arrives back at her cell, she finds the Simpsons waiting to have a family dinner with her. 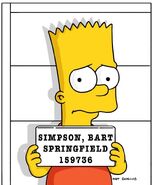 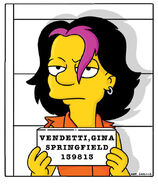