There's Something About Marrying

There's Something About Marrying

The family, dressed as bruised and beaten hockey players, skates around the living room holding the Stanley Cup.

“Just because you're a lesbian, it doesn't make you less of a bein'!”
―Marge Simpson

"There's Something About Marrying" is the tenth episode of Season 16.

Gay and lesbian couples are allowed to get married in Springfield and Homer takes advantage of it with a wedding business, marrying several same-sex couples, including Patty, who comes out of the closet as a lesbian.

Looking for someone new to prank with, Bart and Milhouse find a naive-looking man named Howell Huser, who has been roaming the United States. They torment him so much that he breaks his 47-year long smiling streak. Unfortunately, Huser turns out to be a professional tourist who works for a TV station rating towns for tourism. On his show, he rants about just how terrible Springfield is and gives the town the worst he has ever given a city a six out of ten. Within a month, the Springfield tourism business is in a state of collapse. As a solution, Lisa suggests that they should legalize same-sex marriage.

Soon, hundreds of gay and lesbian couples come to Springfield. However, Rev. Lovejoy still holds the view that marriage is only between a man and a woman and refuses to join any same-sex couple. Homer, when he overhears that ministers get paid $200 per couple, plans to become a minister himself by going online and registering himself. Shortly afterwards, he marries every gay couple in town. Homer, still money hungry, puts up a sign saying "Will marry anyone to anything", meaning that he literally will marry anyone to anything or anyone they wish (even inanimate objects like the Sea Captain marrying his mermaid ship head). Later, Patty comes to the Simpson house and tells Marge that she is a lesbian herself (eventually came out of the closet) and is in love with a pro-golfer named Veronica. Marge is extremely uncomfortable with this new fact, even though she has been supportive of the gay marriage act and the evidence was always there.

On the day of Patty's wedding, Marge makes a surprising discovery: Veronica is actually a man by the name of Leslie Robin Swisher who is disguised to be on the women's tour. At the ceremony, Marge states about "Veronica's" secret. As Leslie confessed why he did this, he asks Patty to still marry him. After a brief pause, Patty finally stands up to Leslie and exclaims, "Hell no! I like girls!" And everyone gave Patty a big round of applause. Lisa then states that Homer will have to quit his minister business, even though there is no stated evidence as to why (Bart even questions Lisa statement) . After that was settled, Patty thanks Marge for accepting her. She and Selma then go to leave a bag at the airport unattended, as a way to meet security personnel.

"There's Something About Marrying" was met with positive reception as well, particularly from gay rights groups. The Gay & Lesbian Alliance Against Defamation (GLAAD) was welcoming of the episode, calling it "a ray of light". GLAAD executive director Joan Garry enjoyed seeing Marge's transformation, from having ambivalent feelings for her sister to then supporting her. He commented that "when Marge learns that Patty's about to marry someone who isn't really a lesbian, she comes to realize that what her sister really deserves is to be in love with and married to a person who's right for her. If millions of Simpsons viewers came away from last night's episode with that little bit of moral truth, it was time well spent."

AfterEllen.com's David Kennerley approved of the willingness of a "hit network TV show in prime time, watched by children and adults" to "serve up such a politically charged issue". Rick Garcia, an activist of the gay rights group Equality Illinois, said to the Chicago Tribune that the episode would likely affect society in a positive way because of the iconic status of the show which "shapes our attitudes". Unlike many of the conservative groups, Kennerley noted that "in the show's tradition of equal-opportunity lampooning, the message is not all pro-gay. Irksome lesbian stereotypes abound, and Nelson the bully suggests they 'legalize gay funerals.' And naturally, Reverend Lovejoy shutters his church to the same-sex sinners."

According to Simpsons writer Mike Reiss, the episode also had supporters among conservative groups. He told Encore magazine that "gay people came out very much in favor of it and were happy with the episode, but arch conservatives and right-wing Christians loved the episode, too, because they seemed to think we were making fun of gay people. We really had it both ways."

Kennerley further wrote that "based on this episode, The Simpsons is in top form. It still reigns as the funniest, brashest, fastest-paced half-hour you'll see on television." Bill Gibron of PopMatters also thought the episode was funny, commenting that it "explored the often-cited 'slippery slope' of allowing matrimony to be defined outside the parameters of a man and a woman—with hilarious results." In regards to the revelation that Patty was gay, The A.V. Club wrote that it "wasn't particularly earth-shattering" but that Marge's initial reaction provided a good twist to the episode.

J. Stewart Burns received a Writers Guild of America Award nomination in the animation category for his work on "There's Something About Marrying", although he lost the award to another Simpsons writer. 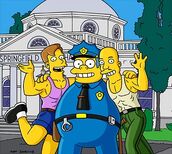 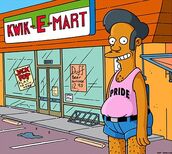