Bartender at Juggernauts and Knockers

“You said if I slept with you, I wouldn't have to touch the drunk!”
―Titania protesting to Duffman.

Titania is a bartender who has worked at Juggernauts and Knockers. She was the runner-up in the "Beer–Tender of the Year" contest.

Titania was in the "Beer–Tender of the Year" contest, where she pulled out all the stops in using her "assets" to increase her chances of winning. She started by spilling beer on her ample chest, which succeeded in attracting everyone's attention. She then won the "Trick Pouring" round of the contest by jumping up and down while filling cups of beer (which had the effect of making her large breasts bounce up and down) while Moe and the other contestant did actual beer-pouring tricks. In the "Question and Answer" round, she answered "Goat!" to the question, "Duff Beer is rooted from sparkling clear mountain… what?" and Duffman (who was judging the contest) gave her a pass on the question.

In the last round, the "Drunk Toss," it was revealed that Titania had slept with Duffman. When Duffman told her to toss her drunk, she protested that he had said that if she slept with him, she wouldn't have to touch any drunks. Duffman brushed her off, saying "Duffman says a lot of things," and Titania angrily stomped off, withdrawing her from the contest.[1]

When Santa's Little Helper was Duff's mascot, Titania was seen in one of its advertisements.

She appeared in Ned's nightmare about Hollywood.

Titania was seen on the sign of a Knockers.

Titania and Baby Gerald once tried to solve a kidnapping at Wall E. Weasel's. The two competed against Maggie and Moe as they looked for clues. 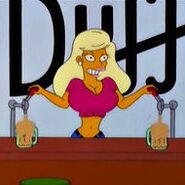 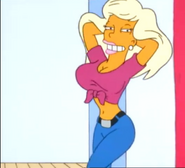 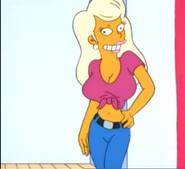 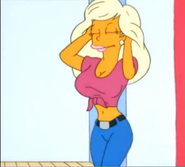 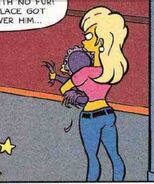 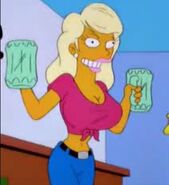 Retrieved from "https://simpsons.fandom.com/wiki/Titania?oldid=942075"
Community content is available under CC-BY-SA unless otherwise noted.