“I said I don't want any damn vegetables!”
―Todd Flanders[src]

When exposed to profanity, Todd himself starts to curse. An example would be after Todd heard Homer cursing, he had said "Hell, no" and "I said I don't want any damn vegetables" at the dinner table[1]. When Moe Szyslak loses his temper at Uncle Moe's Family Feedbag restaurant, Todd responds with "Ow, my freaking ears!"[2]. Whether due to immaturity or relentless sheltering by his parents, whenever Todd comes into contact with anything outside his family and their pious ways, such as the time he and Rod were tricked into eating a Pixy Stix by Bart Simpson, he turns nasty, telling his older brother to "go to hell zitface", much to the delight of Bart [3]. He typically dresses in shorts and on some occasions wears a floppy "newsboy" cap. After the death of Maude in a freak accident, Rod and Todd became somewhat withdrawn and even more religious; when Ned married Edna Krabappel, however, they began to act more like normal children. Both boys also spied on Bart and Lisa being bathed in the backyard of the Simpsons house, though they tried to deny it upon being spotted.

Todd can play the violin quite well, and is a part of the Springfield Elementary School band. He also plays miniature golf quite well[4]. Both himself and Rod quote rhymes Ned has taught them such as 'Users are losers' and 'Smokers are Jokers'. Todd is nine, a year older than Lisa Simpson but a year younger than Bart Simpson. It is highly implied that both he and his brother are gay.

In his teens, Todd had a sexual relationship with a woman named Jenda, who later dates Bart[5]. At age 30, Todd, with his brother, Rod, is a cross dressing lounge singer. They live with their father, who uses his pension to pay for their estrogen treatments. At age 38, he and Rod still live with Ned and take care of him because his eyes fell out[6].

Todd appears along with his brother Rod Flanders and Ralph Wiggum as Hobbit-like children who help Homer and Marge defeat the two-headed dragon in order to get the Keycard[7].

There is also some controversy as to which of the two is the elder. The commentator golf tournament states that Todd is 10. One of the corrections that the TV-magazine show Rock Bottom makes in the episode "Homer Badman" is to their claim that "the older Flanders boy is Todd, not Rod". (although this could have been included purely to stir up fans). Later, the Flanders family eat out for Rod's "big ten-o", suggesting the two are of similar age (however, the present time in at least one other Simpsons episode has been set two years before that of others). However, Lisa, when babysitting Rod and Todd, tells a story about a robot named Todd who "had a brother named Rod, who was two space years older than him". Todd responds by saying, "I don't like this story!"

As Rod is shown to be quite a bit taller than Todd, the claim that Todd is the older brother is disputed. Both Rod and Todd were born before Lisa (who is 8), Todd appearing a younger age than Bart (who is 10) and when Bart was entering "the terrible twos".

Despite these discrepancies, the Simpsons official website states that “Todd is the youngest and most impressionable member of the happy Flanders clan”. This seems to trump any inconsistency concerning age seen in the episodes. On the other hand, the character profile for Rod Flanders in The Simpsons: A Complete Guide To Our Favorite Family describes him as the "youngest of the Springfield Flanders.", but they have made a few mistakes in that book. Another possible reason for the variation is that, in the DVD commentaries for show, the writers have stated that they are never sure which Flanders sibling is Rod and which one is Todd and are often forced to check character models to be sure. According to the commentary, early show writers used two different mnemonics to identify the taller brother; first that Todd started with T and was Taller, or that Rod was long like a rod and hence taller.

Younger Todd with Rod and Bart

Todd and his family

Todd and his older brother showing off their tattoos.

Todd and Rodd been pranked by Bart.

Todd sewing Bart's shirt while Rod irons Bart's shorts as Nelson asked them to sew and iron his clothes.

Fighting over sugar with his brother.

"I said I don't want any damn vegetables." 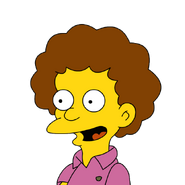 Retrieved from "https://simpsons.fandom.com/wiki/Todd_Flanders?oldid=651212"
Community content is available under CC-BY-SA unless otherwise noted.