“Hello, everyone. You know, Halloween is a very strange holiday. Personally, I don't understand it. Kids worshipping ghosts, pretending to be devils. Oooh, things on TV that are completely not appropriate for younger viewers. Things like the following half-hour. Nothing seems to bother my kids. But tonight's show, which I totally wash my hands of, is really scary. So if you have sensitive children, maybe you should tuck them into bed early tonight instead of writing us angry letters tomorrow. Thanks for your attention.”
―Marge Simpson

"Treehouse of Horror" (also known as "The Simpsons Halloween Special") is the third episode of Season 2 and the first Halloween special. Kang and Kodos make their first appearance in this episode.

The first of the annual Halloween spook-fest. In 'Bad Dream House', the family moves into an old haunted house and are possessed to kill each other by a mysterious voice. In 'Hungry Are the Damned', the family is abducted by Kang and Kodos (who make their first appearance) and fattened up to the extent that Lisa questions their motive, and does so incorrectly. Her nosiness results in the Simpsons being dropped off at home again. In 'The Raven', a poem by Edgar Allan Poe is recited with Homer and Bart as the characters.

In a parody of the original Frankenstein film, Marge warns viewers that the following program (The Simpsons) may give their children nightmares, so she suggests the adults to "tuck your children into bed tonight instead of writing us angry letters tomorrow." The show then begins.

When Homer comes back from trick-or-treating, he notices Bart and Lisa are telling ghost stories (while Maggie watches) in Bart's treehouse. He climbs up and eavesdrops while Bart comments on Lisa's first story. Bart begins telling his own story called: Bad Dream House.

In a parody of The Amityville Horror, the Simpsons move into a new home at a great price. Lisa and Marge are scared there is an evil presence lurking in the house, though Homer says there is nothing to worry about, despite there being a vortex in the kitchen. Homer throws an orange into the vortex, although the ones who live in the vortex throw it out with a note that asks them not to throw in stuff. Bart is then strangled by a lamp cord as the house threatens the family to leave, hurling Homer up to the ceiling.

When everyone tries to settle into sleep, the house takes possession of Homer and the children, and the four of them grab various weapons to kill each other, but Marge stops them. The family then finds out there is an ancient Indian burial ground in the cellar. Suddenly, the house threatens them that they will perish horribly. Marge becomes outraged and yells at the house to shut up and show them some manners, and after a few moments, hurt by Marge's words, it complies. After harassment by Bart and Lisa, Marge explains that since they are living in the house, the house is going to have to accept this. The house asks them to leave for a moment as it chooses what to do. The estate determines that it would rather die than live with the Simpsons, and the house implodes into nothingness, which is a nod to Poltergeist (1982). Lisa implies that the house's self-destruction cannot help but cause her some guilt.

Hungry are the Damned

In a parody of the 1950 story by Damon Knight from Galaxy Science Fiction (and its 1962 Twilight Zone episode adaptation) titled To Serve Man, the Simpsons are having a barbecue in their backyard until an alien spaceship suddenly abducts them (and struggles to abduct Homer due to his immense weight).When they arrive on the ship, they meet Kang, Kodos, and Serak the Preparer, who treat the Simpsons extremely well by giving them countless amounts of food to hold them over until "the great feast at Rigel 4." These three aliens call themselves Rigellians.

After the family is weighed on a giant scale and the Rigellians constantly make references to food, Lisa becomes suspicious and questions the aliens' true motives. One night, she wanders around the spaceship and heads into the aliens' kitchen, when the chef Serak cooks something to "give the humans the perfect flavor"

After he leaves the room, Lisa grabs the book called "How to Cook Humans", runs to her family and accuses the Rigellians of feeding them all up to eat the humans. However, it is then revealed that Lisa did not see the whole title of the book, which is actually called "How to Cook for Forty Humans". The Rigellians feel sad, disappointed, and angry at the family, so they send the family back home to live the life of "not gods, but normal human beings". Then, Lisa speculates that they, the Simpson family, may be the true monsters after all while the family blames Lisa for her actions.

In a parody of the Edgar Allan Poe's classic poem, "The Raven", The Raven Narrator (Homer) reads a book to forget the lost lover of his, Lenore (Marge). He hears a knock, but there is no one in front of the door. Knocking goes on and he finds out it is a raven (Bart) behind the window. As he opens it, the raven flies into the room, sits on the bust of Pallas above the door and says "Eat my shorts" (actually said by Bart,whom is interrupted by Lisa telling him that the raven says Nevermore and nothing else). But as the story continues, the raven keeps on repeating "Nevermore", driving the narrator crazy. He tries to catch the raven, only to provoke it to drop books on him. At the end, the mad narrator lies in the center of the room, surrounded by books, and the raven laughs.

Later, as the whole episode comes to a close, Bart complains to Lisa that "The Raven" was more depressing than scary. Lisa notes that "The Raven" was published back in 1845 and suggests that people may have been a lot easier to scare back then. The siblings go on to talk about the other stories weren't all that scary either and how, by current standards for stuff like horror movies, even a movie like Friday the 13th is fairly tame. Bart, Lisa and Maggie climb down from the treehouse and go to bed, unaware that their dad was listening in on all the stories and, unlike his kids, is genuinely freaked out by them. While the family is lying in bed, Homer's still freaked but Marge tries to assure her husband that they're just made-up stories and won't bring him any harm. As they're lying in bed, Homer notices a raven outside their bedroom window that's similar to the one from the poem--he declares that he "hates Halloween" and hides under the sheets.

The episode is considered to be non-canon and takes place outside the normal continuity of the show. Part of the series' attraction to the writers is that they are able to break the rules and include violence and kill off characters, which they would not usually be able in a regular episode.

Since it first aired, the episode has received very optimistic reviews from television critics and is almost always included in the lists of "best episodes" of the show. 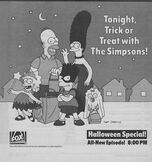 Hungry are the Damned poster

Retrieved from "https://simpsons.fandom.com/wiki/Treehouse_of_Horror?oldid=914841"
Community content is available under CC-BY-SA unless otherwise noted.