For the continuing series of Halloween specials, see Treehouse of Horror series.

Paul Anka as Himself

Like many other Treehouse of Horror episodes, it contains three self-contained segments. In "Attack of the 50-Foot Eyesores", a freak storm brings Springfield's over-sized advertisements and billboards to life and they begin attacking the town. The second segment, "Nightmare on Evergreen Terrace" is a parody of the "A Nightmare on Elm Street" film series, in which Groundskeeper Willie attacks schoolchildren in their sleep. In the third and final segment, "Homer3", Homer finds himself trapped in a three dimensional world. The last segment is the first time that a Simpsons episode featured a segment that was filmed in live action.

Krusty, as the Headless Horseman from The Legend of Sleepy Hollow, is holding his laughing head, and hurling it at the camera, which makes the show's title appear on screen in blood. We hear Krusty do his trademark groan. Later, in the couch gag, the family is hung onto nooses, staring blankly (meaning that they committed suicide). Despite being dead from asphyxiation, Maggie manages to suck on her pacifier (possibly because she is not heavy enough to choke from the noose).

Attack of the 50 Foot Eyesores

In a parody of the 1958 film, "Attack of the 50 Foot Woman", Homer goes to Lard Lad Donuts to get a "Colossal Donut", where he denounces their advertising when he realizes that the "colossal donuts" aren't very colossal. So, in revenge, he steals the Lard Lad mascot's metal doughnut. In the midst of a freak storm, Lard Lad and other giant advertising figures come to life to terrorize Springfield. Homer eventually returns the doughnut, but Lard Lad and his friends simply keep destroying the town. Finally, Lisa goes to the ad agency responsible for creating the mascots, and an executive suggests that since advertising only works if people care, the best strategy would be to just not look at the monsters. He tries to write a song, but suggests that it would actually sound better coming out of Paul Anka, who arrives in Springfield to perform the song, "Just Don't Look," with Lisa. The citizens of Springfield do not look at the monsters, who lose their powers and become lifeless as usual. Homer is still paying attention to Lard Lad and the metal doughnut, so Bart and Lisa pull him away, causing Lard Lad to collapse and become lifeless.

In a parody of "A Nightmare on Elm Street", Bart is outside playing Frisbee with Santa's Little Helper. However, Groundskeeper Willie mysteriously appears and tries to kill Bart (a la Freddy Krueger). Bart is slashed with a rake, and he wakes up from this nightmare, only to find marks on his body. Many other kids at Springfield Elementary School also say that they were terrorized by Willie in their nightmares, and what he did actually affected them. Principal Skinner says that there's nothing mysterious about Willie and that he simply disappeared before telling them not to question the "bizarre cover-up". When the students take a test, Martin finishes early, falls asleep and is killed by Willie in his nightmare. But in reality, Martin dies in class, with his face and body frozen in a look of absolute terror. When Bart and Lisa tell Marge about Martin's death, she says that she doesn't see how it involves Willie, but Bart says that they didn't mention Willie. Marge explains that when she, Homer and other parents attended a PTA meeting, Homer turned up the thermostat (even when there was a note saying "Do Not Touch"), and the extreme heat made Willie burn to death. Because the parents looked on and did nothing, he told the parents that he will get his revenge by killing their children (in an area where the parents cannot protect them) in their dreams.

That same night, Bart, Lisa, and Maggie try to stay awake to avoid dreaming, but Bart later chooses to go to sleep and dream of fighting Willie. Bart appears in his dream and attempts to fight and kill Willie, who can also shapeshift into other forms. Willie shape-shifts into a bagpipe spider and is about to kill Bart when Lisa enters the scene, trying to wake him up. But since she is in the dream, that means she has also fallen asleep (she claimed that she was just resting her eyes). They are about to lose the battle and get killed when Maggie appears and uses her pacifier to clog the bagpipe chimney, causing Willie to explode. The next day, everything is back to normal, but Lisa is still worried that Willie still might be out in the world somewhere, waiting to kill them in ways they can't imagine. A bus then stops in front of them, allowing Willie to get off where he makes a few pathetic attempts to scare the children. When the bus takes off, Willie chases after it because he left his gun on one of the seats. While running behind the bus, he leaves one of his shoes on the street.

In a parody of "Alien³" and "The Twilight Zone" episode "Little Girl Lost", Homer desperately tries to avoid Patty and Selma during a visit. He hides behind a bookcase and stumbles upon a gateway to the third dimension while eventually becoming a CGI version of himself. Homer explores the peculiar area while searching for a method to escape it, but a bouncing cone stabs him in the butt. When he accidentally throws the cone point-first into the center of the ground, it starts to collapse into a sinkhole, taking Homer closer to it with increasing force. Outside the third dimension, Professor Frink appears and explains to the others that Homer is in the third dimension. Chief Wiggum shoots the wall that Homer passed into when entering the third dimension, but the bullets just get sucked into the black hole after Homer narrowly dodges them. Bart then ties a rope around his waist, and goes into the third dimension to save Homer. He enters the dimension and is amazed by the world around him. However, the distance between him and Homer is too far for Bart to reach Homer. Homer leaps for Bart, but falls short and into the black hole. Bart screams as the world ends up imploding in on itself and is about to fall into the infinite void, but thanks to his safety rope, he is pulled out of the dimension. Bart eventually tells the truth about what happened, much to Marge's dismay. Hoping to provide solace, Reverend Lovejoy says to her that Homer will end up in a better place. Eventually, Homer lands into a dumpster in the "real" world, where he is met by shocked "real" people. He then forgets his troubles when he sees a shop named "Erotic Cakes" and goes inside.

The first version of the episode was very long, so it featured a very short opening sequence and did not include several trademarks established in previous Treehouse of Horror episodes. "Homer3", pitched by executive producer The Late Bill Oakley, features three dimensional computer-generated imagery animation provided by Pacific Data Images (PDI).

The DVD Audio commentary for this episode featured information about the original ideas for the episode. The original opening for the episode was supposed to feature the Simpsons characters as famous horror characters, including Ned Flanders as Leatherface from Texas Chainsaw Massacre, but due to time, it was cut to only feature Krusty as the Headless Horseman. Homer³ was also supposed to feature Homer going to different dimensions, featuring different art styles (one of them said to be Homer in paper cut-outs) but once again due to time and budget, they only featured Homer ending up in the real world.

In the final scene of the episode, Homer is sent to the real world in the first ever live-action scene in The Simpsons. It was filmed on Ventura Boulevard in Studio City and directed by former executive producer David Mirkin. "Attack of the 50 Foot Eyesores" includes a cameo appearance from Paul Anka, who sings the song "Just Don't Look".

The episode received very positive reviews. It was described as "Complex, very assured and very clever, [...] The computer graphics are outstanding, and the final scene – as Homer enters our dimension – is one of the highlights of the entire series." Colin Jacobson of DVD Movie Guide said, "'Attack of the 50-Ft. Eyesores' stands as the strongest of the three segments. It doesn’t blast off the screen but it seems imaginative and fun. The Nightmare on Elm Street parody has its moments and comes across as generally entertaining. However, it lacks the bite the best pieces offer. Unfortunately, 'Homer3' gives us the weakest of the bunch. It tosses out a few funny bits, but it mostly feels like an excuse to feature some 3-D animation."

Homer in the 3D world 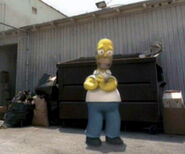 Homer in the real world
Add a photo to this gallery

Retrieved from "https://simpsons.fandom.com/wiki/Treehouse_of_Horror_VI?oldid=877175"
Community content is available under CC-BY-SA unless otherwise noted.