Daniel Radcliffe, the main star of the Harry Potter franchise, guest starred in the third segment which parodies the Twilight novels and movies. Radcliffe said that he is a fan of the show and guest starring is "a huge honour". Hugh Laurie guest starred in a segment that parodies Dead Calm. 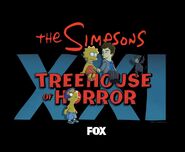 Logo of Treehouse of Horror and Fox Broadcasting.