All Work and No Play Makes Jack A Dull Boy

"Treehouse of Horror XXIV" is an episode of Season 25, aired on October 6, 2013.[2] According to Al Jean in an interview on September 28, 2012, this episode is already completed and includes "a very violent world resembling Dr. Seuss', and also the movie Freaks."[3]

The three-eyed crow flies across the sky and is electrocuted. It falls on the Tire Fire. Meanwhile, there is an invasion of zombies trying to get into Springfield. The army shoot them. The camera pans over and reveals Jimbo and Kearney are decapitating the statue of Jebidiah Springfield. The head lands on Ralph, knocking his head to the ground. Ralph's head starts to lick his ice cream. Dr. Hibbert is running away from the zombies, while Comic Book Guy is being dragged along with them. Lard Lad gets zapped by lightening. He comes to life and smashes some cars. He is pulled up by a Cyclops, resembling Chief Wiggum, who eats him and his donut. Alfred Hitchcock and Mrs. Krabappel are sitting on a bench at the school. Hitchcock throws bread crumbs at her and Krabappel is swarmed by crows. In the school, Bart is writing "All Work and No Play Makes Jack a Dull Boy". He looks behind him and sees Stephen King writing the same text on the walls. He looks menacingly at Bart, who runs out of the classroom and skateboards through a boarded-up door and lands on a creature being swept leaves on by, a monster resembling Groundskeeper Willie. At the Power Plant, Homer accidentally throws a nuclear rod over his shoulder, he mutates into a horrible monster. Carl and Lenny look on. Carl pulls on a suit, a mustache and shades. He draws a sword out and runs after Homer, cutting Lenny's head off. Lenny then drinks his coffee through his neck. The camera pans down underground, showing the corpses of the Tracey Ullman Show versions of the Simpson family as well as a skeleton of Godzilla. Mr. Burns is shown reading a book with eyes on his hands, Mr. Smithers as a pixie washes his them. Burns then eats Smithers. At the Grocery Store Maggie is passed along a checkout, and is priced at "666". She is placed into a paper bag. With Marge as a giant blue cockroach. Maggie looks at Gerald and he molts his skin to show that he is a monster, Maggie's skin molts too, only to show that she is Gerald. He shakes his fist at the monster. The school orchestra has all four Phantoms of the Opera singing, with Lisa playing the saxophone wildly. The Phantom of the Paradise then signals the door and she leaves, still playing. Bart then skateboards away from Comic Book Guy and up the tentacles of Cthulu and passes multiple horror story writers after running away from classic horror creatures after seeing a crowd of scared Springfieldians running away, screaming. Maggie is driving a hearse and drives into Milhouse, who is then eaten by a giant Three Eyed Fish. A large panning shot of Springfield with various horror movie characters (and Kang and Kodos). Homer pulls up on the drive and is ran over by Maggie in the hearse. The family rush onto the couch. Lisa is sucked in and is transported to a Pans Labyrinth-esque land.

On Halloween, the kids all have mumps and Marge leaves them alone with just one M&M each. The door opens later, revealing "The Fat in the Hat". Grampa then berates the Fat who knocks him out. The Fat's "helpers" are revealed under his hat to dispose of Grampa. They fall to the floor, dead. The Fat pours gasoline on them and burns them, causing the house to blow up. The Borax appears to them and reveals that he has sold out. The Fat throws him in a dustbin, they go through town with the Fat causing havoc all throughout. They then trick or treat at Burns' mansion, Burns refuses and the Fat blows his house up, Burns then has his neck snapped by the Fat and is cooked, and given to "Homeless Hoos". At Moe's the Fat threatens to kill Moe because he has no candy and will not serve minors. Later, he is seen wearing him as a suit. After the kids complain about wanting candy, the Fat holds up a gun to Apu while the kids take all the candy. The Fat then forces Apu to spend time with his family. Later, the Fat kills Patty and Selma and passes out license plates to the crowd. He then blows up the Town Hall and releases the animals from the zoo. The kids grow scared and escape on a Humble Gumbamble. They then get on a Krustiforous Krumble, which is slaughtered by Sideshow Bob, they finally get a lift from the Bee-Man of Bumble. The Fat is at the house waiting for them, gloating that he's staying with them forever -- until Maggie stabs Fat with his own umbrella. The kids turn Fat into a rug and stuff their mouths with candy because, "Kids will get candy, whatever you say!"

Bart and Milhouse are flying a box kite near the airport. After Milhouse is taken to the hospital for severe pollen allergies, Bart is left alone and grows sleepy. He ties the kite's string around his neck and falls asleep. Arnie Pye flies through in his helicopter, the kite gets stuck on the side and Bart's head is sliced off. Bart wakes up with his head next to Lisa's, noticing that they are both joined at her neck. Lisa was originally against this, but Dr. Hibbert tells her that her brain is in full control of her and Bart's body. At home, Homer turns Bart's bedroom into a man-cave. On the door is a sign "No Girls...Or Boys attached to Girls". At school, Groundskeeper Willie accommodates for them by drawing an extra head on the bathroom stick-figure. Lisa shows Bart for show and tell and is praised by Ms. Hoover. However, the teacher berates Bart for showing Lisa for show and tell. At therapy, Bart and Lisa learn to like each other and become friends. However, Bart soon discovers that while Lisa is asleep he is in control of the body, so, to make sure that he will forever be in control, he slips some Nappien into her yogurt (and Homer pours the rest of the pills into his yogurt because he thinks they're mix-ins). After failing to cut Lisa's head off with Principal Skinner's car, he ties them to a log in a sawmill. Lisa wakes up and forces Bart's head over to the saw's path; his head is cut off. Lisa looks over at Bart gloatingly and does not notice the next saw, resulting in her head being sawed off too. Bart wakes up next to Selma, who is pleased now that she has a karaoke partner while Lisa's head ends up on Krusty's body and Lisa is forced to be Krusty's comedy partner.

At Mr. Burnsum's carnival many spectators watch in awe as he presents many of his freaks, including Kang & Kodos, the Terryfying Callback (Bart on Selma's neck), Marguerite, an acrobat, Homer, the strong-man, who uses his tongue, and Moe. At the trailer park, Burnsum berates the freaks for leaving early, but Marguerite stands up for them. Homer then orders her back to his side, revealing they are to be married to the freaks. After Burnsum and Homer leave, Moe and the freaks thank Marguerite for standing up for them. She tells them never to give up hope and kisses Moe on the cheek, he falls in love with her. Lenny and Carl advise Moe to ask Marguerite out, but he knows he can never compete with Homer. Lenny, however, reminds him of his emerald ring. Upon hearing this, Homer makes Marguerite marry Moe instead, telling her that he is dying. The Freaks accept her as one of them and Moe and Marguerite are officially married. Marguerite catches Homer pouring poison into Moe's wine glass and loses respect for him. Homer sadly walks out of her trailer. Homer notices that Burnsum has been lynched by the Freaks, who then "tar and feather" him. Back in the present day, Homer says "And that's how I met your mother." With the music from "How I Met Your Mother" playing over the credits. 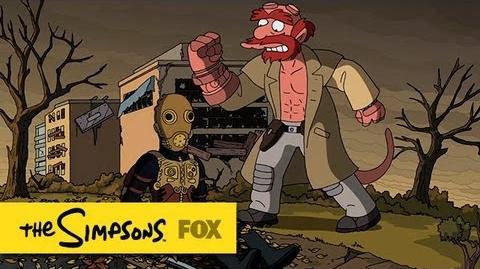 Strongman Homer in The Simpsons: Tapped Out
Add a photo to this gallery

Retrieved from "https://simpsons.fandom.com/wiki/Treehouse_of_Horror_XXIV?oldid=491413"
Community content is available under CC-BY-SA unless otherwise noted.