For the continuation series of Halloween specials, see Treehouse of Horror series.

"Treehouse of Horror XXIX" is fourth episode of Season 30 and the 29th Simpsons Halloween special.

Homer wins an eating contest against the mythical Cthulhu, Springfield is overrun by plant body-snatchers, Lisa finally snaps, and Mr. Burns opens a retirement home with some Jurassic upgrades.

Intrusion of the Pod-Y Snatchers

Springfield is overrun by plant body-snatchers, as previewed at Comic-Con 2018.

Lisa finally snaps, and Bart is her target.

Mr. Burns opens a retirement home with some Jurassic upgrades. There, they inject all of the senior citizens with dinosaur DNA.

The episode starts in Fogburyport, New England, the birthplace of Green Clam Chowder, a parody of the town of Innsmouth from H.P. Lovecraft's horror novella ''The shadow over Innsmouth''. The Simpsons arrive there because a book stated it's a place to visit before they die. However, it was revealed to be a trap and that they will be devoured by Cthulhu. However, Homer states that he was promised an oyster eating contest against Cthulhu, and Homer wins. As a reward, the family decides to eat Cthulhu.

Intrusion of the Pod-Y Snatchers

In a parody of Invasion of the Body Snatchers, which had previously been parodied in an issue of Bongo Comics, the segment starts off with an underwater base of Mapple where the late Steve Mobbs (on screen) tells the new Myphone and the new unfunny version of him to a hyper audience. When everyone is on their phone, the unfunny Steve is revealed to be a plant alien on a mission. Now on the plant planet, they shoot spores to Earth (going right next to the Planet Express ship with a cloth saying "BRING BACK FUTURAMA" and then getting blown up by The Orville). In Springfield, everybody transforms into plant versions, including a plant Otto with a marijuana leaf for a head. Comic Book Guy states this is a homage to the movie Invasion of the Body Snatchers while the movie itself was a ripoff of The Thing. When a plant version of Comic Book Guy says "pad", Milhouse and Bart get scared and run away. Bart and Lisa tries to escape in Lou's police car, but Lou gets transformed into a plant and surely after, Bart and Lisa are infested. It is revealed that the people were transported into an Utopian land by these plants. However, the plant people see the citizens with pods (Mapple products) and ask where they found those. Bart says they found them under the living room Christmas tree.

After a sleepover at the the Van Houten Residence, Milhouse, Nelson, and Bart awake to find themselves inside a cell, suddenly freed by Penelope, the one that trapped them in it. She had lured them with bottles of Sunny D laced with ketamine. Penelope, whom is actually a multi-personality Lisa - similar to James McAvoy's lead character in the M. Night Shyamalan film, Split (2016) - is acting strange, and closes them in again after they don't ask for an encore on her performance.

Lisa attacks and kills Nelson and knocks Milhouse into a recycling paper bin, before Bart asks her what happened to her, to which Lisa tells the story: Bart grabbed Lisa's spelling test, changing her answers, mocking Miss Hoover and granting her an F. Lisa has one last change and gives Bart a last chance to save himself and he redeems himself, saving himself from being killed by trash, while Milhouse was transformed into a literal “paper boy".

In a parody of the Jurassic Park franchise, Mr. Burns opens up a Jurassic-themed retirement home, a park filled with elders rejuvenated mixing their DNA with dinosaur DNA. He brings Springfielders to the park, showing them the new "retirement home". At first, they're all human, healthy and feeling young again, with incredible strength too, but once Homer raises the temperature after Grandpa complains about the temperature being too cold, they transform into dinosaur creatures.

Visitors and Mr. Burns are killed by the elders, while the Simpson family are threatened by Grandpa and Jacqueline Bouvier, but Lisa courageously confronts Grandpa, and find out they all just needed to be cherished and respected. In the end, the Simpson family escapes alive and unharmed, though their helicopter is being flown by Ludodactylus Agnes. 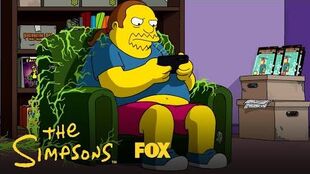 Comic-Con 2018 The Spores Attack THE SIMPSONS 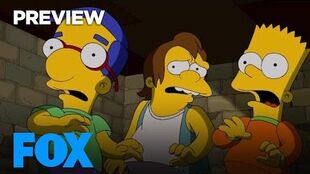 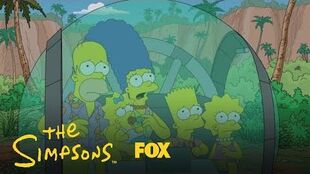 The Simpsons Run Into A Geriatric Dinosaur Season 30 Ep. 4 THE SIMPSONS 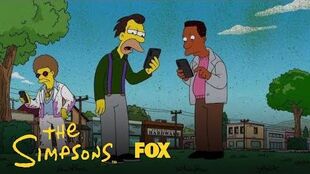 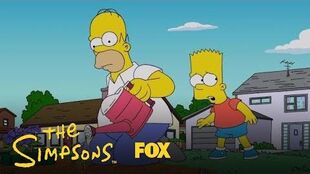 Bart Is Worried About Others Turning Into Zombies Season 30 Ep. 4 THE SIMPSONS 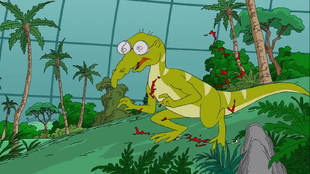 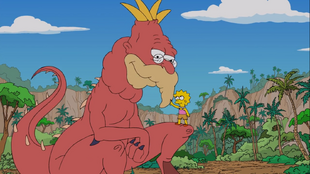 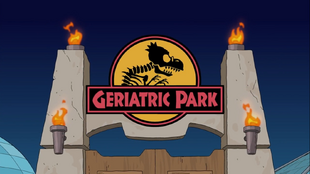 GERIATRIC PARK
Add a photo to this gallery

Retrieved from "https://simpsons.fandom.com/wiki/Treehouse_of_Horror_XXIX?oldid=932098"
Community content is available under CC-BY-SA unless otherwise noted.