For the continuation series of Halloween specials, see Treehouse of Horror series.

Wanted: Dead, Then Alive - Sideshow Bob finally kills Bart, but he is uncertain about what to do with his life after completing his mission.

Homerzilla - A parody of Godzilla, in which Homer is a giant monster that can only be calmed down with donuts.

Telepaths of Glory - Lisa and Milhouse earn telekinesis from radiation, but Milhouse goes mad with power. 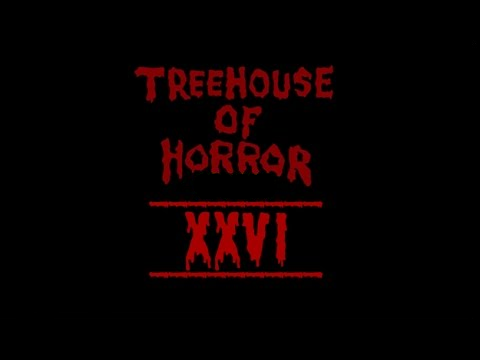 Bart is making a competition at school when he gets a text message from Milhouse, saying that Mr. Largo is stuck in a harp. When Bart enters the music room, he realizes that Sideshow Bob is there playing a classic violin song. He tells Bart that he stole Milhouse's phone to attract him to the music room to accomplish his lifelong dream: kill Bart.

Bob draws a blue marker X on Bart's forehead, and Bart taunts him. Bob then pulls a spear gun and shoots Bart, killing him. Bob then plans to take Bart's corpse to his house to celebrate his accomplishment, and even updates his Fiendbook status from "attempted murderer" to "murderer" after taking a selfie with the deceased Bart. Since his main objective in life is done, Bob plans to complete other dreams, such as becoming a literature teacher at Springfield University, but discovers that being a teacher is very stressful and the only thing that has made him happy was hunting down Bart for 24 years (Bart is ten years old perpetually), so Bob builds a machine to bring Bart back to life so he can kill Bart multiple times in various ways, similar to the Itchy and Scratchy Show.

Bob's machine is discovered by Lisa and Santa's Little Helper. The Simpson family breaks into Bob's basement and reanimates Bart, but Bob appears with a shotgun, saying that as they are in his house, he can shoot them for trespassing. Homer attacks him with a lamp which rips Bob's head off, and Marge agrees that Bart can keep Bob's body. Bart puts Bob's head into the re-animator with a horn, frog legs, a chicken body, a tail and a booger, making him a bizarre looking creature. Bob then reluctantly carries out his teaching career to a class of rude university students.

In a parody of Godzilla, a crazy old man (Grampa) in Springfield, Japan, is constantly mocked because every day he drops a perfect doughnut into the ocean with his grandchildren (Bart and Lisa). When asked why he does such things, he says that is because if he doesn't, a huge sea monster will rise and destroy the city. Instead of understanding, they just laugh at him. One day, while he is preparing a donut for his "ritual", he chokes on the toppings and dies. With nobody to drop the donuts, the sea monster, Homerzilla wakes up and destroys the city.

The scene cuts to the present time, where executives are watching the Godzilla movie, stating that it is so terrible that the picture deserves a remake. Two years later, "Zilla" is released, but the movie is a total failure. They plan to throw all the merchandise into the ocean, but the containers wake up another sea monster and a message appears, reporting that Godzilla will return as soon as people have forgotten about the last one.

In a parody of Chronicle, Bart, Lisa and Milhouse are hiking in a forest to spot butterflies, but Bart and Milhouse haven't noticed any, which makes Lisa displeased. Bart scares Lisa with dead owls, and she hits Milhouse's nose with the camera, making him lose his balance and fall into a giant hole. Bart and Lisa plan to jump into the hole to rescue him, making all three stuck inside of it with nuclear waste from the nuclear power plant. The radioactive goo explodes, sending all the three kids back outside the hole.

When they wake up, Milhouse and Lisa discover they have gained telekinesis (Bart didn't, as his brain is not powerful enough), so they plan to use the powers in their favor. Lisa only makes a few changes, but Milhouse goes mad with power, only to get knocked out by the lightning strike. Lisa says she didn't do it, making the family curious to discover who did this. They then realize that Maggie also has Telepathic powers (as she was using a radioactive rod as a pacifier).

The episode finishes with Kang and Kodos complaining that once again they have made a cameo appearance and even make a reference to Treehouse of Horror III.

Retrieved from "https://simpsons.fandom.com/wiki/Treehouse_of_Horror_XXVI?oldid=920612"
Community content is available under CC-BY-SA unless otherwise noted.