She, along with the rest of the octuplets are a result of fertility drugs taken by Manjula, after she and Apu decided that they wanted a baby. However, Apu and Manjula swiftly find they are not up to the task of raising eight kids all at once. After talking with Larry Kidkill, the octuplets are put in a nursery at the Springfield City Zoo, where they are put on display in a show named "Octopia", several times a day. After Apu and Manjula are displeased by this, he and Homer decide to break the children out of the zoo. 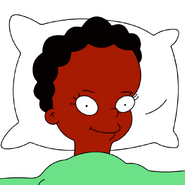 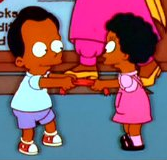 Uma shakes a can.

Uma as a child in "Future-Drama".
Add a photo to this gallery

Retrieved from "https://simpsons.fandom.com/wiki/Uma_Nahasapeemapetilon?oldid=762596"
Community content is available under CC-BY-SA unless otherwise noted.