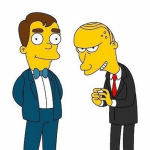 I am one of the main figures in Russian Simpsons wiki and a content moderator, all my tries I have put there, though I visit English segment from time to time.

I registered at the end of November 2018 and found out that almost any article was not written competently. It was not Russian language, it was sore to see. So I understood – if I will not fix everything, nobody will.

During the winter I changed this Wiki's shape, practically everything was corrected: spelling, punctuation, formulations, also numerous corrections in categories. Many articles were rewritten, tons of a tautology and language nonsense were removed. Also replaced a number of pictures of characters with qualitative.

I don't have favorite episodes, nor favorite characters, I take the series commonly.

Retrieved from "https://simpsons.fandom.com/wiki/User:Convoyer?oldid=853217"
Community content is available under CC-BY-SA unless otherwise noted.