This is me, Dahsimpsdons. I love Simpsons, even those couch, chalkboard and billboard gags - everything! Actually, I hadn't seen all Simpsons episodes, but I try to see as many as I can :)

This is where I live

Lithuania. It's the country which was mentioned twice in The Simpsons. Those episodes are: "Boy Meets Curl" and "Hardly Kirk-ing".

•Billboard gag: "Worst Billboard Ever!" Comic Book Guy on it.

•Lisa's solo (not necessary): "In The Garden Of Eden" from episode "Bart Sells His Soul", Season 7.

•Couch gag: Simpsons find themselves in iCarly studio, while Carly and Sam comes. Homer yells: "Who are you, people?"

This one may not happen, but I'd like to see it someday. :)

"Behind The Laughter" gallery

Homer in "Behind The Laughter"

Marge in "Behind The Laughter"

Bart in "Behind The Laughter"

Lisa in "Behind The Laughter"
Add a photo to this gallery

Simpsons outside The Simpsons

Credits of "Duckman and Cornfed in 'Haunted Society Plumbers'". Dan Castellaneta guest-voiced Homer in this Duckman episode, and "special thanks" was given to Matt Groening, The Simpsons, Gracie Films and FOX Broadcasting.
Add a photo to this gallery 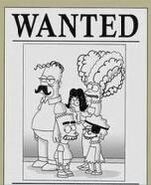 Bart draws similar family, who just walked in the store to the Simpsons on "WANTED" poster. This poster was seen in "Simpsons Movie". Also, it was my first avatar of the Wikia. 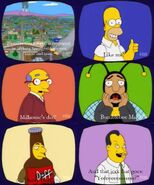 "Families Comes First" supporters. This ad was seen in "Marge vs. Singles, Seniors, Childless Couples and Teens and Gays".

"MY EYES! THE GOGGLES DO NOTHING!" In "Radioactive Man"

Not a promo picture of "Moonshine River", but there are four girls, which Bart dated (Mary isn't there in this picture)

"The Most Meaningless Milestone Of All!" At Long Last Leave title screen gag

Looks like promotional picture of "Angry Dad: The Movie". This time, it's used as a couch gag in "At Long Last Leave".

My return to the Wikia (thoughts actually)

Seems that I saw many pics disappearing. WHY?????

And it seems that all of the episodes will have their gallery page. "Thanks" to DJ MC something. >_<

Info: She's cute, happy, loves to life. She often helps Springfieldians to host cultural events. Sometimes she's shy, but not always. She loves to live in America, but she often misses her home country, United Kingdom. Despite her being 25, she likes to act as a teenager.

I will fulfill some more info about her later, but she's imaginary only. I'd like to see her in Simpsons someday, if it's able. :)

I didn't watched all latest season episodes, so, I couldn't think about Nedna. I didn't voted in Nedna's question too. I might say that I was late to vote. But:

I should disagree, because someday creators of the "Simpsons" had revived Maude, but they never ever did. I wish to see her alive, because Rod and Todd could be not happy with their stepmother. (I mean that Edna and Ned married in "Ned 'N Edna's Blend".) After all, they started to go to school (Springfield Elementary School).

Why they didn't gave Seymour one more chance?

Nobody spotted "Nedna" on "Lisa Goes Gaga": Ned Flanders seemed to shown without Edna, when he saw Lady GaGa. Maybe she has been appeared in that episode, as being in the bunch of people, when Lady GaGa tried to cheer up Springfield. Plus, the 5 Season 24 episodes didn't had a word about it, but Edna appeared in "Moonshine River", only without Ned. And in "A Tree Grows in Springfield", Ned and Edna are seen speaking to each other.

Spongebob and Treehouse Of Horror Similarities

Homer's Nightmare ("If I Only Had Brain") and "Welcome to the Chum Bucket" shares some similarities:

"Time And Punishment" and "Back to the Past" shares some similarities too:

Spiderman, Mermaid Man and Homer were bitten by radioactive insect (mostly - spider) and got their super powers:

Other series and episodes

Most of ideas may be took from Simspsons, because I find, that for example "HOMЯ" premiered earlier than "Patrick Smartpants" (when show's dumb character (here - Patrick) becomes smart), and that show is "Spongebob" too.

Simpsons movies, similarities and their trivia

My home country also broadcasts "Simpsons", of course in Lithuanian. They are called "Simpsonai". They aren't dubbed, but voiced by same person. 1-2 seasons were voiced by Kristijonas Karinauskas, later he was replaced by Džiugas Siaurusaitis. Kristijonas was found dead in 2001.

The following characters are translated in Lithuanian (click on them to see, which character is which):

What "The Simpsons" team never tried

I see, that song, called "Gangnam Style" and sung by Psy is really popular. I was checking Simpsons Facebook (fan)site and few people wants to see Simpsons family dancing as in "Gangnam Style" video. However, I believe, if some Americans submit that idea to "Couch Gag Contest", it would be rejected. Why?

The rules obviously says: no MUSIC. That means that "Gangnam Style" wouldn't be played in the background, but instead on ANY kind of music, the theme song would be played. Also, I think that copyright belongs to Korea (South, because North is solely obsessed with communism and if anybody would imitate South Koreans, would be obviously terorised :D) and rules claims, that submission must NOT include names and/or descriptions of any copyrighted media production (excluding The Simpsons™), including, without limitation, films, books, television programming, etc., or identifying descriptions of any media property.

Retrieved from "https://simpsons.fandom.com/wiki/User:Dahsimpsdons?oldid=431682"
Community content is available under CC-BY-SA unless otherwise noted.