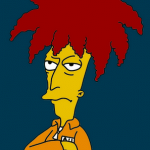 “I don't like The Simpsons, because people are killed there.”
―Me when I was younger

When I was a small child, I saw some scenes from two the Simpsons episodes: Marge cut Homer's finger by mistake in Trilogy of Error and Homer killed Moe (because of Snake's hair on his head) in Treehouse of Horror IX. I was shocked and didn't understand how it is possible that there is a blood and killing people in the animated series. This time I really hate this series.

It all changed last year. In the spring 2011 I started to watch the Simpsons, just of interest. After one month, the Simpsons became my favourite animated series.

Origin of my name

Well, this is hard. The Simpsons are so popular because almost every character in the series is funny. Here is my list.

Quickly and in cold blood

Harry Potter
Add a photo to this gallery

At first, I am not from Czech Republic. However, there is no Slovak dubbing of the Simpsons, so I watch the Czech version. Slovak language is very similar to Czech. The Czech Simpsons are called "Simpsonovi" (and Slovak are "Simpsonovci")

Characters usually have the same name as in the original, but there are also some exemptions.

Retrieved from "https://simpsons.fandom.com/wiki/User:Terry12fins24?oldid=685590"
Community content is available under CC-BY-SA unless otherwise noted.